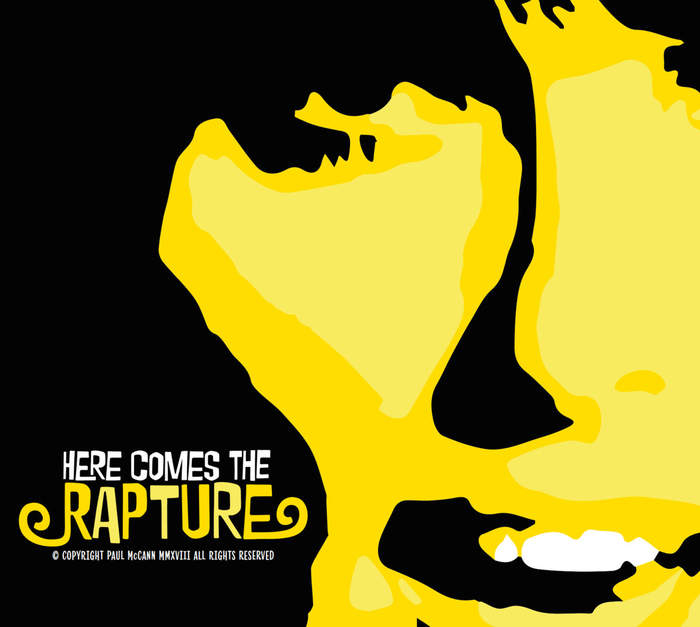 The debut release by Paul McCann; ‘Here Comes The Rapture’ sounds fresh but nostalgic in a world of fleeting, credible alternative music acts. A 21st Century take on those outlaw troubadours who refuse to settle with the conventional music scene and instead carve their own artistic path and in turn finding their own audience and credibility.

‘Here Comes The Rapture’ is not only a relevant title in this day an age but a pointer of the talent which at times glides under the surface of the modern Irish music scene. Yes all the influences that Paul McCann has had in his lifetime come through, from the aforementioned Beck to The Velvet Underground, the album is a beast of its environment, the sound may lead to the past but the direction is solely into the future.

It is not a tip of the hat to the legendary figures of a far-gone time more of a reinvention, if they existed today this is how they would sound. That may sound like a bold statement to make but the truth is in the art, since the invention of the CD we have learned to pick and choose the tracks from an album we want to listen to, in this case we don’t have to, an album you can stick on from start to finish with out skipping through is a rarity and is exactly what ‘Here Comes The Rapture’ is, unique and free-flowing.

From the opener “Keep The Devil Within” which starts with the tuning screech of a radio, perhaps a metaphor for the listener finally finding the track they are searching for, or an audience finally tuning into Paul McCanns wavelength.

“Only A Fantasy” is a summer sounding track, a nostalgic look back at carefree days of our youth, you may feel you know the sound but it’s a powerful emotion stirring hook of a chorus which draws us in, McCanns voice shows a staggering range here; “I’m in love with a girl But she don’t have time for me”.

The beautiful guitar melody of “Release Me” is the right track at the right time, as if a break as the album slips into San Francisco of the 1960s, “The Magician” screams of a tie-dye feeling until a very 21st century chorus progression knocks us, the album is full of unexpected moments like this and is easy to picture “The Magician” in a Tarantino-style movie, cool in a modern age.

The electric ballad “All The Words You Say” is a beautiful piece of music, uplifting with a guitar solo which is fiery and fitting in a very atmospheric track a result of excellent production, then we dive back to the past with “Scarecrow” more 60s-Brit-Psychedelic-a than Woodstock, again it dropped out nowhere, twisting and turning unexpectedly.

The closer, the choral “Blinded By The Dark”, is again more Fairport Convention than Buffalo Springfield, as a finish it is hypnotic and leaving you wanting more, a perfect device, maybe a bonus track to bring it full circle back to the start or maybe that’s just the greed in the listener wanting an encore as the show ends. Paul McCann is not new on the music scene, after hearing this you will actually wonder why he has worked in the shadows for so long only coming into the sunshine with ‘Here Comes The Rapture”, it is an album however that deserves to be discovered, for fans of that bygone sound, fans of modern experimentation and those of us who grew up in the 90s guitar era it’s the whole package.