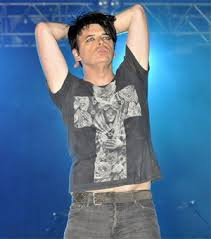 November, 14th. Manchester, a whole trip from Belgium to a grey and cold Manchester, just to see the godfather of the electro rock.

Splinter is Numan’s first album of entirely new material in about 7 years, following the 2006 album Jagged. And Numan really found his inspiration back.

The show was impressive, the new light show with a wall of LED screens was pure Numan. He also changed his image, from the 80’s, as a cold, static, motionless person, toan animal on stage, although its in March his 56th birthday.

The set list was mainly comprised with Splinter songs, and tracks from across the decades, even from the Tubeway Army period.

It was really a brilliant gig, and the atmosphere in the Manchester Academy was fantastic.

Although my video camera was confiscated at the venue, I could still manage to make some nice recordings. All the vids can be separately watched at my youtube. Here you can watch them.