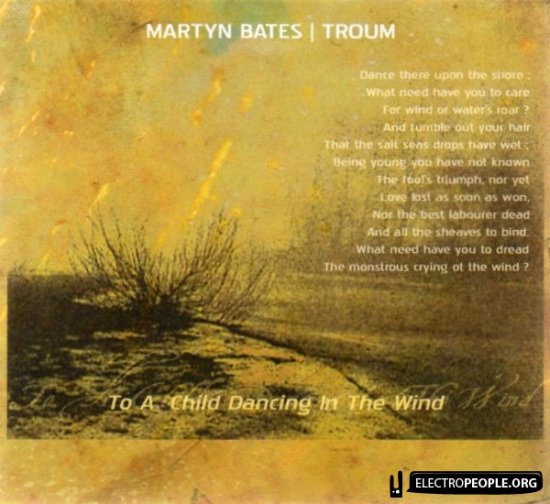 To A Child Dancing In The Wind

Some collaborations seem indeed weird on paper, not even mentioning the slight change that they actually can have, but in this case we can only speak of a dream marriage.

German band Troum are what you can call one of the burning fires in the droneworld and in the years 2004 & 2005 they met Martyn Bates.

Those who know their stuff are indeed aware that this is the voice from 80's darkwave (or whatever you want to call them) band Eyeless In Gaza.

The result is spread over 6 songs and during those 30 minutes it's like you're entering some fairy tale world. The dronesounds are (like expected) similar to those from Fripp and Eno but the magic touch is of course the troubadouresque voice from Martyn.

"To A Child Dancing In The Wind" reveals its character by its title as this is a poetic journey into the mind of some great musicians. A more than welcome relief in the high heap of crap we're confronted with. Brilliant!