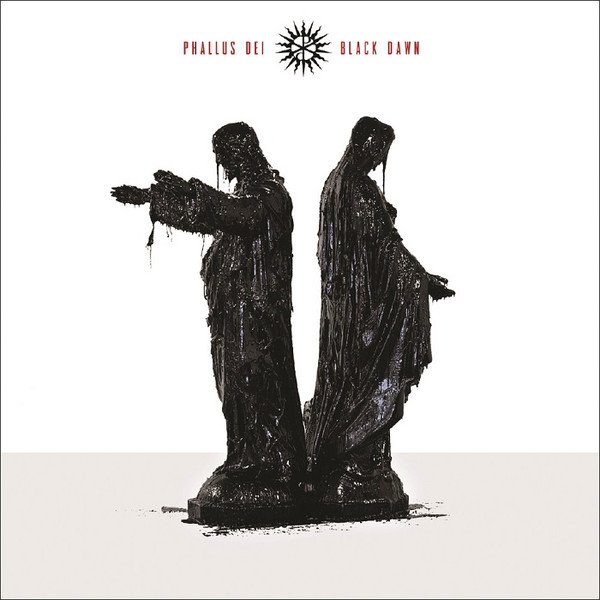 Phallus Dei... has existed for 25 years, making very dark drone with an industrial undertone and heavy guitars tuning in sometimes. Before reviewing the album, a little bit of dark history about the band....

Genesis
"I can make a CD like that", Oliver told Uwe Hoehn from Dark Vinyl Records just for fun after listening to a lot of industrial stuff that was being released back then. Pontifex Maximus; their debut CD from 1991, basically was a giant middle finger to a great part of the gothic/industrial scene which in the early nineties had turned into the same idolizing, superficial music scene that alternative, experimental artists once rebelled against. Oliver had created two cassettes already as Phallus Dei (named after Amon Düül II's legendary 1969 album) and ran the record label Unclean Production. Oliver's (in his words) "atonal egotrip" Pontifex Maximus was
released with the obligatory over-the-top hocum and - surprise! - became a huge success.

Dutch connection
In 1992, Richard van Kruysdijk's cassette release under the moniker Blindfold gained national attention in the Dutch wave/goth scene and Richard was invited to play at a festival in Paradiso, Amsterdam. In the crowd that night was Oliver, who promptly signed Richard to his label, and later invited him (and Mk.E.) to a musical session at his studio. Several recordings made on this very first magical meeting eventually ended up on Cyberflesh (1993), their second album and a radical shift in sound.
Continuing their work on Cyberflesh in The Netherlands, Richard asked his former band mate Joris Huijbregts to join in. The line-up for the next four years was complete and the band took off to Fuerth, Germany to finish work on the album in the Audiocom Studio with producer Dalibor "Dali" Blazek. Their change in direction was well received, and whilst still preserving their playful approach, Phallus Dei turned into a "serious" band overnight.

Basement years
On Pornocrates and it's offspring Metacrates, Phallus Dei further refined their sound, recording the basic electronic tracks themselves in Oliver's basement, a.k.a. Studio 7, on their Fostex 8-track tape recorder and adding everything else as well as mixing the whole thing in two weeks at Sunhouse Recording, a top studio in
Nuernberg, Germany with producer Bobby Bachinger. The studio complex also accomodated a fully equipped film studio, and in between the recordings, the band would record three video clips that were released on VHS as part of a limited edition box set.
A year later, in 1994, the band would return to the Sunhouse Recording studio to record Luxuria, featuring Gitane Demone (ex-Christian Death), who contributed vocals on two tracks. Luxuria was released as a mixed mode CD/CD-ROM with four audio tracks plus the three video clips when Phallus Dei embarked on a German
tour with Sixth Comm (UK), Black Rose (I) and Sielwolf (GER) with additional member Sandor Caron on keyboards.
Their uncompromising, continuous eclectic musical approach alienated them further from the goth/industrial scene and Phallus Dei deliberately manouvered themselves into an outsider position.
In 1995, Joris and Richard laid down the foundation for their last record with this line-up: Orpheus & Euridyce. Joris wrote and recorded the theme for violin that set the mood for the album and the band finished the recordings in Studio 7. Two years after Cyberflesh, rock and metal were definitely out the door, as the band dived
into hypnotizing atmospherical sounds with only a hint of traditional pop arrangements. At night, when they had finished work on O&E, they would continue to record ambient tracks, improvising intuitively by candlelight. These recordings eventually made up the first PHD2 album: Universum.

Although the band was very productive, musical discussions became increasingly harsch, and in 1995, Joris chose to leave the band. Both albums were mixed in the Cocoon Studio in Erlangen by Oliver, Marc and Richard and were released in 1996. Appropriately, this period was closed by a compilation, released in 1997 in the USA
by Hollows Hill / Triple X Records: Adorations.

Intermission
In 1996, Richard chose to direct all his attention to his newly founded solo project Sonar Lodge, and combined with turbulent times in their private lives, Phallus Dei came to a hold. The lines remained open though, and it was a matter of time and circumstance before the band would pick up from where they left off.
After a five year break, the dust had settled and when unreleased 8-track recordings resurfaced, the idea arose to make another PHD2 album. Marc and Oliver joined Richard in his new studio, and they finished the whole thing in one weekend. Appropriately entitled Resource, the band had found new elan to investigate and rework
their unfinished recordings from 1996 and within a year Nature Mortes (2001) was released; a new Phallus Dei album that musically continues where they stoppedfive years before.

Back in 1996, Richard had started creating reworks from Pontifex Maximus. The trio also finished these and Osmose was released (like the original 1991 album) on Dark Vinyl Records in 2004. With the release of Seelenriff / Versuchung; a limited 7" on the Austrian Klanggalerie label, all loose ends from their work in the previous century were tied up and all the signs were there for another change in sound.

Tabula Rasa
In 2005, Richard had become deeply involved in his record label Music for Speakers (est. 2000), and new band Strange Attractor (with Niels van Hoorn from The Legendary Pink Dots and Marie-Claudine from Sonar Lodge) when Phallus Dei received a request to create film music for a movie by Heiko van der Scherm (currently
in post-production). In 2006, Phallus Dei started creating many new songs during their weekend sessions at The Lodge (Richard's studio in the Netherlands). Meeting up only a few times a year, these weekend sessions were outbursts of accumulated creative ideas. Regardless of their low output in the last decade, by 2010, Phallus Dei's uncompromising attitude and lust for investigating new musical territories with every release
had gained them cult status and their critically acclaimed album A Day In The Life Of Brian Wilson was released by Big Blue Records (PL) accompanied by one, exclusive concert at the beautiful Kuppelhalle during the WGT festival in Leipzig (GER) featuring Michael Schaffer (Birdmachine) on guitar and electric sitar. The album
featured guest vocalists Clara Engel and John Walker (The Walker Brothers) and showcased a new Phallus Dei, cut loose from all the genre-specific musical treatments and confident in their own carefully cultivated language. Also that year Oliver founded [moss] with Michael Schaffer.

25th Anniversary
Phallus Dei kicked off their 25th anniversary year (2016) with a "pay what you want" download album on the netlabel Nostalgie De La Boue. Vapour Unwinds The Dolls contains 5 more radical remakes of their track "Will You Come Now".

Black Dawn was announced by Phallus Dei as being very dark and morbid and after several spins I could not conclude anything different. Slewed is one, long and very painfully slow drone, tormenting, with some noisy elements after 9 minutes in this song and it ends almost literally as a quiet death: minimal sound and a drum beat that mimics the last convulsions of the heart.
A tiny crackling, jerky sound announces the second song Starman. A ten minute long sound carousel. Halfway through this great song, classical instruments such as sax abruptly pitch into the song as a festering pustule which bursts. Chaos follows, supported by a thriving drumbeat. Zauberwald is similar to the previous opus, except that it's a bit more uptempo. A string ensemble joins the electronic drone. The song reaches a climax after over 10 minutes to then fade away into very mechanical sounds that seem to come from a factory. Then grab a glass and get laid back in a comfortable chair because we get a heavy digestible Krieger, which attacks you mentally for over 20 minutes. This song is extremely dark and menacing. The bass is regularly played on one string and sounds like a thunderclap. Halfway through more noisy sounds creep in without really sounding chaotic. Darkness falls, and all the creatures of the night wake up. It really sounds ominous and gives you goosebumps. Stigmata is even more dark, and has some deep guitars and other, more classical strings. In the middle, guitars get tortured and drums hit you right in the face. The further we get into this (again) 20 minute long hell of a song, the more chaos, noise and mayhem we meet. This is really heavy to listen to, but Phallus Dei shows mercy by letting the sound end in a very relaxing, minimal, lovely noise.

I am not at all a drone-lover, but this album I played 4, maybe 5 times to give it the chance to impress me.; And a miracle happened: it did. After 25 years, Phallus Dei is still there, taking us on a journey into... very dark, depressing walls of sound, during 5 songs, which seem to never end.

Same genre: DRONE
STAATSEINDE • Crazy Earthlings Collab Tape - Episode II
THE MARY HART ATTACK • The Falling Sun
DANIELLE DE PICCIOTTO & ALEXANDER HACKE • Perseverantia
NADJA • The Stone is Not Hit By The Sun, Nor Carved With A Knife
BLACKWOOD • As the World Rots Away
GLERAKUR • Can't You Wait
THORN 1 • The Leave of Leaves
MICHEL BANABILA • Early Works/Things Popping Up From The Past
RICARDO DONOSO • Quintesence
BE • One