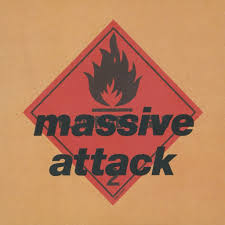 1991 was a scary year. After two weeks, we knew that the world would be involved in a dangerous war. It was frightening to see images of jets that were bombing Baghdad, and we never forget the pilots who proudly stated that the effect was just the same as that of a Christmas tree. So yes, 1991 would become a very dark year, and not only because of the guns, but also music wise. Out of a sudden, the video of Unfinished Sympathy was screened every hour on MTV. It is perhaps the most depressive video thatwas ever made. It’s quite simple done, but no one can forget the images of Shara Nelson who is walking through the streets of Los Angeles watching all the misery around her. At that time bands had to be careful, as innocent tracks like War by Edwin Starr or even Abba’s Under Attack (imagine that!) were banned by the BBC because of the Gulf War. Robert "3D" Del Naja, Grantley "Daddy G" Marshall and Andrew "Mushroom" Vowles wanted to have a massive airplay for their single, and they took no risks and simply changed their name to Masssive. And it worked, the song became a super hit and until today it is considered as one of the most important songs of the (British) dance scene.

I must admit that it was a strange feeling for me. As a youngster I was addicted to indie music, and yes, of course my feet were moving when hearing something like Rappers Delight by Sugarhill Gang, but I was never into rap or hiphop at all. Apart from some albums by Prince and Michael Jackson (don’t laugh, he’s a genius), I even had no records of black artists, and there was certainly no soul in my collection. Yes, before you start correcting me, I’m well aware of the fact that Massive Attack is categorized as trip hop, but that term was only invented by British journos three years later. For some reason all these bands seem to come out of Bristol, and so are the pioneers.

Soon after, I was hooked on that song, it was literally a book that came open and I wanted to know more. And what a sound it had! Not only did the collective use genius samples (from PIL to Isaac Hayes), but the lyrics were so damn real. For once you didn’t have to be a black kid from the ghetto who grew up with an UZI to understand what these lines were about. They wrote (in fact, they still do) songs about daily urban life, scary or sad images you see every day, feelings you get every second as this world is unfair (unless you’re a rich kid who doesn’t have to sing that stupid tune by Roger Whittaker). Every song on this album is just perfect, and even almost 25 years later nothing changed. This is pure beauty, and yes, those jets are still bombing the Middle East…