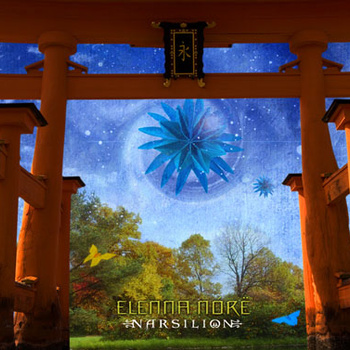 Last time Sathorys Elenorth and Lady Nott aka Narsilion were more busy with their side-projects Der Blaue Reiter, Lugburz and Endless Asylum but 2011 finally sees the birth of the fourth album by this medieval duo.
Not only does this album feature collaborations with artists like Bjärgö (Arcana), Gerhard Halltatt (Allerseelen) and Pilar Molina (Aura Noctis) but "Elenna Norë" is also made with a wide range of Japanese instruments.
We haven't the slightest idea what a taikos, a kotos or shakuhashi flutes might look like but it definitely gave Narsilion their very own sound, which makes it more than "just another medieval record".
The ten tracks that are featured on here are sung in various languages (French, English, Italian to name a few) which gives this record a phenomenal impact.
“En Les Portes De L'eternitat" (no dictionary needed) might give you the impression that you're invited to some medieval party, but as soon the heavenly voice from Lady Nott makes its entrance, not to mention the Dead Can Dance guitars, you know that "Elenna Norë" will be a twisted experience which is, at the same time, the strength of this CD.
There’s a great duality to be heard as on one hand you have the enchanting beauty that's more than once enveloped in a mysterious atmosphere but on the other hand this album feels like danger lurks around every corner.
Not one song sounds the same and in this genre that's more than an exception.
Absolutely recommended.

This CD has been released on Ars-Musica-Diffundere which is a sublabel from Black Rain.