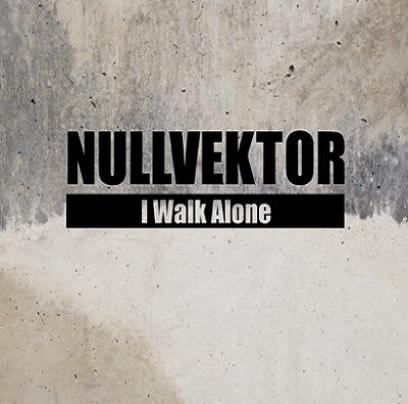 Behind the mask of Nullvektor you'll find Stefan Böhn, a man who indus fans certainly know as a member from Mono No Aware, a band he left to deliver his indus skills to projects like Pzychobitch and S.i.n.a., in quite a successful way as his previous album "Electrophenique" got rave reviews and pleased fans from melodic powernoise.
His latest one "I Walk Alone" (released on the mighty Hands) is another chapter in Stefan's musical history as this release takes him more into IMD areas.
The most bizarre track comes with opener "Abgeklärt" which brings us to the world of indescribable distortion beats where the core seems to be a melody that could have been lifted from a horror movie.
But that's just the beginning, as soon as "Freisetzungssystem" kicks in you're delivered another range of distorted sounds.
For those who think Nullvektor is just a bit too experimental for their taste, they will be struck if they hear a track like "Hast Du Genug?" where you can hear a techno tune behind the wall of the drumming beats. Mind you, indus it stays: why else would it have been released on Hands?
True lovers can even dare to do some bellydancing on "Liter Uozo" as the crazy Arabic tune will drive your body insane, at least that's how it drove ours.
Those who like to have their daily harsh noise will be satisfied when they hear the self-explaining title "Rückwirkung", while the electro-influenced "Auf Dem Weg" once again stressed the genius behind Nullvektor.
Despite its harsh sounds maybe one of the most melodic current releases you can find on Hands.