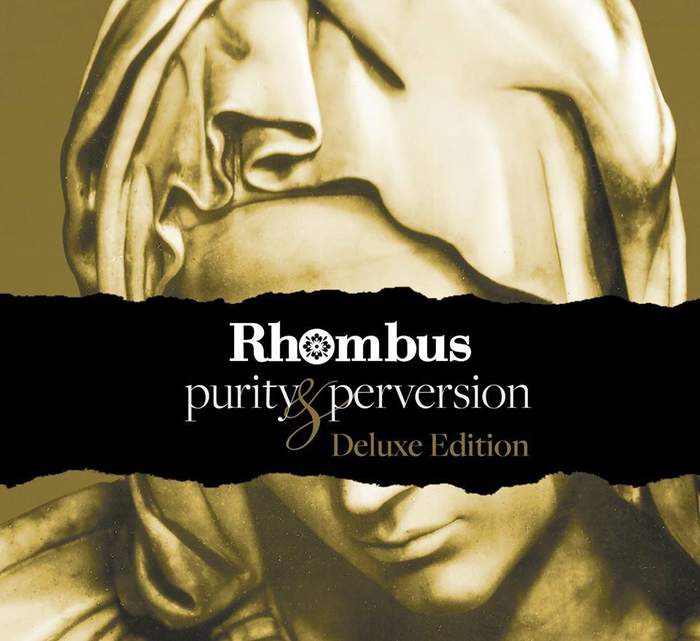 Next year, the British goth rock band Rhombus will celebrate its tenth anniversary. Apart from some EP’s and three albums, the band regularly plays at British alternative clubs and is a welcome guests in other European countries (Rhombus played at WGT in front of 1500 people).

The power of it all? Excellent, melancholic gothic rock that has a touch of the 70s (think of Bowie and even some Led Zeppelin) and traditional 90s goth rock (because of Alixandra Corvyn’s superb female vocals, I guess Skeletal Family is a quite good reference). But let us stop with name dropping because Rhombus doesn’t need that! Of course you can easily guess which records the band members have in their collection, but they definitely have developed a Rhombus-sound.

As you can guess, we receive many goth rock records at our office, but it rarely happens that all tracks are good and that’s exactly the case here. Purity & Perversion was released last year as an EP, but to this deluxe edition an extra track is added (Written In My Eyes), a cover and a remix. And above all, the songs are re-recorded and so they include Alixandra’s intriguing voice.

The alternate singing between the male voice (Edward) and the ethereal Alixandra works perfectly, and above all these guys know how to write tunes that move you to tears. Okay, I promised not to mention other names, but Daylight definitely could have been a tune by Wayne Hussey, simply because this is goth rock that makes you feel alive. The high light surely is A Moment Today which is featured twice... it’s the kind of song that makes you speechless. Pure gothic beauty.

As said, this new version also includes a cover. Rhombus opted for Adrianne Dances by the obscure band Das Projekt (Adrianne Dances). This band from Yorkshire proves (once again) that the best goth rock still comes from Great Britain.