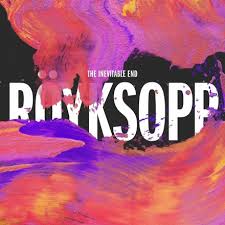 Whatever happened to Norway's glacial electro-popsters? In debut-album Melody AM, they had a pension for life yet chucked the winning template of smooth, cool and memorable rave-lite anthems out of the plane window in favour of writing club-anthems that weren't.

Follow-up The Misunderstanding had a few moments, while Junior and Senior had too much filler to be really considered for album-of-the-year lists. So to The Inevitable End, supposedly the duo's last album as Royksopp. Rather than re-invent the wheel, the pair have enlisted guest vocalists Robyn, Jamie Irrepressible and Ryan James aka Man Without Country to provide lyrical support to a mix of top-notch electronica and unimpressive meanderings. Admittedly, Sordid Affair is more in-keeping with all that's great about Royksopp - a chilly-disco pounder that relies on subtlety rather than the ham-fisted beats found on Monument. Save Me with Susanne Sundfor is also sweetly sung and boasts a killer chorus yet the singer's other contribution Running To The Sea is like a gopping Eurovision techno joke that has backfired badly. The Inevitable End is less poppy than its two predecessors but no less listenable - the final pair of songs are mournful epics that round off Royksopp's album career in style.