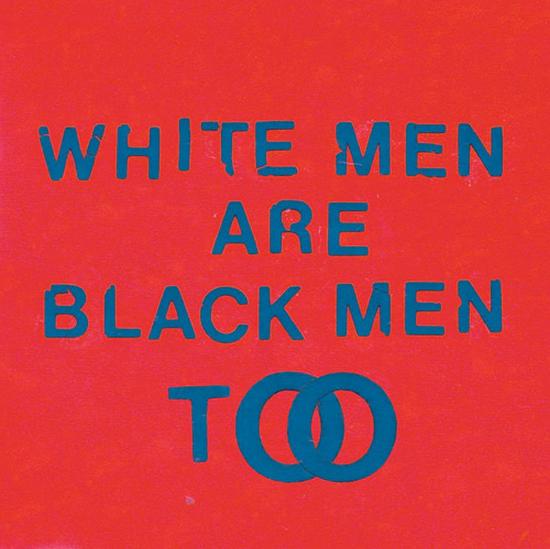 White Men Are Black Men Too

With hip-hop in their veins and alt-pop in their hearts, Young Fathers have come a long way in such a short space of time. Little known before winning last year's Mercury Music Prize for the 9-month old album Dead, the Edinburgh trio have slowly built up a following with regular touring and a few interim singles to satiate demand. Just fifteen months after their Top 40 debut, White Men Are Black Men Too ensures the interest and momentum is sustained with a varied collection of disturbed dances and intense atmospherics.

Rather than rewrite radio-favourite Get Up, Young Fathers have formulated atonal harmonies and crushing beats into a melange of unsettling anti-pop that doesn't quite gel until mid-way through side one when the speaker-pummelling pomp of 27 lurches into earshot, followed by the insistent single choice Rain Or Shine on which they proclaim "I'm ready to fly..." with drums crashing and droning bass-line menacingly keeping time.

From around this point, White Men...really comes into its own. Sirens is a pretty plaintive little number that musically recalls early Caustic Window or Plaid, while 'for fuck's sake...' ushers in the most 'hip-hop' track here, Old Rock and Roll, which culminates in a weird-out mantra for the disaffected. It truly is a freaky experience, like Fela Kuti on acid. If I was to pick a similar artist today, it might be Tricky, another purveyor of imaginative left-field down-beat pop. Listen to the closing funereal Get Started and you'll see the comparison - distorted gospel, anyone?

The vinyl edition is worth investigating - you get a bonus 7" with the excellent Soon Come Soon included, which more than makes up for a few other tracks that miss the target by a country kilometre. But then, if Young fathers were perfect, they'd be just that bit duller.