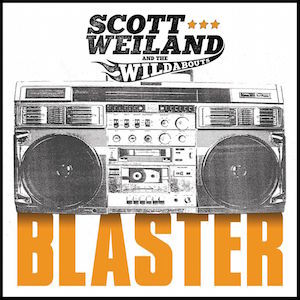 Scott Weiland is known as former front man of Stone Temple Pilots and Velvet Revolver. This is his third record under his own name although this effort appears to be a band effort. It’s not clear if this will stay so, because of the unexpected death of guitarist and best friend Jeremy Brown. It seems that the planned tour is going ahead, so… “Blaster” is filled with nice rock/ pop songs. The biggest problem is however that they don’t succeed to add something to the former work of Scott or (rock) music in general. Jeremy Brown will be missed, because his guitar riffs make the difference. Like in opener ’Modzilla’, the pop oriented ’Way She Moves’, the great rocker ’Hotel Rio’ (it’s impossible not to move your head on that one) and the driven ‘Youth Quake’. “Blaster” is however playing it too safe. There are actually no bad songs on this album, but the eclectic, inimitable aspect of Scott (like on his first solo album) is missed. Listen for instance to ’Beach Pop’, the lingering ’Parachute’ and the very safe played copy of ’20th Century Boy’ from T-Rex. “Blaster” is not the ’blast’ it could have been, but just an ordinary rock album with too much pretensions. That’s exactly the problem. Scott Weiland without pretensions is namely not the normally headstrong, stubborn, nasty Scott Weiland this album needed.