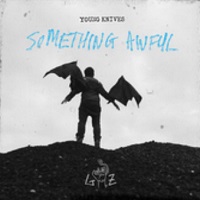 Previously issued as a limited RSD 2015 10" vinyl exclusive, the new EP from the arty leftfielders hits servers during May as an experiment, rather than a stab at the charts. Lead-off song Something Awful is something compelling that builds upon a seemingly moody intro into one of Young Knives best songs in ages. "You tell me that I'm changing/I can feel that I'm changing into something awful.." ain't the stuff of party anthems for sure, but it's inspiration from YK singer Henry Dartnall's grandpa's Alzheimer's is a pointer to where the lyrics originate from. Something Sweet is an insistent piano and drum-driven squall that covers loss of trust while Something Tragic and Something Cheap explore menacing atonal territory with a little more intent.