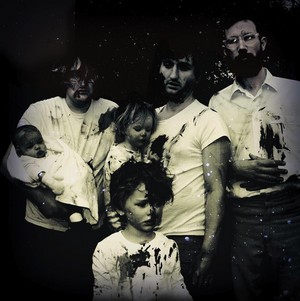 The post punk/ art rock of YOUNG KNIVES is clearly inspired by the eighties. Musically it’s too much over the edge with the experimental jazz meets pop on ‘Green Island Red Raw’. On the other hand the raw production, the gritty guitar/ bass sound and the powerful voice brings back memories to that golden age of punk and wave.
Listen to the danceable ‘Owls Of Athens’, the typical eighties (especially during the chorus line) of ‘All Tied Up’ and ‘White Sands’. Although the start of ‘Bella, Bella’ will raise some eyebrows the song scores highly with the repeating chorus line. Nice one. Best song however is the slowly built up song ‘Marble Maze’ with its orchestral ending.
A poppy mid-tempo ballad song like ‘We Could Be Blood’ has definitely hit potential, but is actually one of those songs you’ve heard so many times before. ‘Something Awful’ is almost sounding awful, because of the singing and the fact that the strength of the band (raw, pure) is for one reason not really working on this song. “Sick Octave” is an album for those who are into the mentioned music genres. For others the issue will be the lack of continuity in quality, but there are still some songs to discover.

Same combination of genres: INDIE ROCK + POST PUNK + POST ROCK
RADICAL BOYS/PJARO • Business, Commerce and the Internet
THE TWILIGHT SAD • Nobody Wants To be Here, and Nobody Wants to Leave