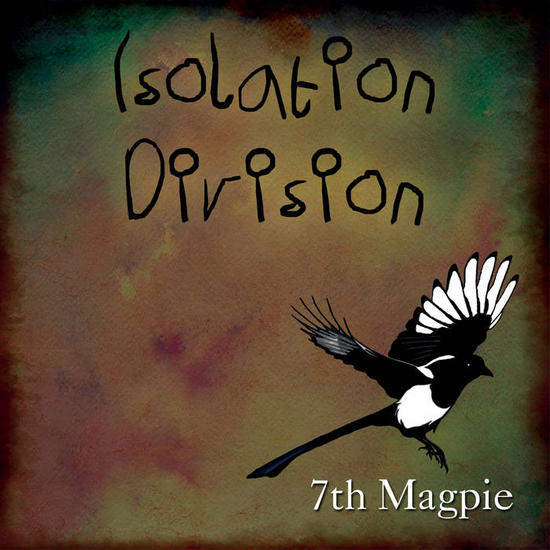 Isolation/Division was the solo project of Mat Thorpe. In 2011 the debut album Sotto Voce was released to favourable reviews. In 2013 Mat found the right musicians to realise the sound of Sotto Voce in a live environment. Drummer Steve Drowbridge and Natasha Donald (guitar/vocals), who also play together with Mat Thorpe in Distorted Pictures, joined the project. So did bass player Warren Pasquill. Through 2014 the quartet began writing new tracks together and so the mini album 7th Magpie came into being. It was released at the end of 2014 and contains 6 songs and a ghost track. Go to the bandcamp site and sit down for a nice 30 minutes break.

Opening track Shadows with its memorable chorus, starts with sparkling guitars that remind me of The Mission. Other bands that come to mind while listening to Isolation/Division are The Chameleons, The Church and Echo & The Bunnymen.

Star of the Sea takes us on a dreamlike journey. Hold sounds gloomier and so do the lyrics. The bittersweet Xmyheart is followed by the excellent Secret Sister (check out the video below). The final track 7th Minor is nicely atmospheric. Musically it would fit perfectly in The Cure's Dissintegration, with its similar melancholic and slightly psychedellic atmosphere.

I like Natasha's voice, it's a great addition, allowing the band to alternate vocal lines or choose for dual singing and play layered guitar lines.

7th Magpie is recommanded for folks who are fond of poppy, dreamy guitar wave. The band announced that through 2015 they will be working on the next full length album. My expectations are high.