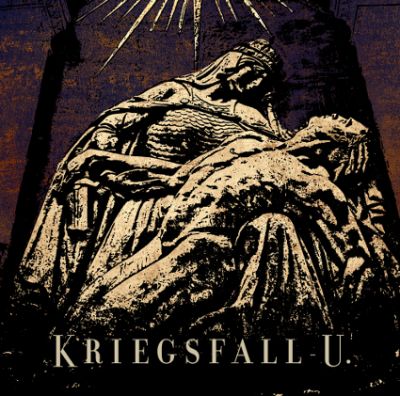 In for some Hungarian neofolk?
Well in case you are, Epidfemie Records presents you with the third album by Kriegsfall-U.
Dedicated neofolk fans might know them as in 2005 they released their debut on Cold Spring but this third one ended up on a label from their home country.
On this album, that has no real title, they have a helping hand from Agnes Toth, from that other fine Hungarian neofolk/darkwave band The Moon and The Nightspirit, who recently released a great album themselves.
This album is dedicated to both Prof. Tamas Molnar and Kozsef Mindszenty, who was the head of the Roman Catholic Church in Hungary and according to Kriegsfall-U the last truthful representative of the Hungarian Kingdom.
As most of the monologues are done in their native tongue we have no idea what they're about but we can imagine that it goes along with the needed patriotism.
Anyway, musically Kriegsfall-U has a lot to offer.
In some way you can divide this album in two. The industrial noises that are combined with the monologues let us evoke old memories, the kind we had when we put our first NON-albums on the turntable, while the second part is more traditional neofolk in the old Death In June style.
Indeed nothing new, but once again we're overwhelmed with a mighty neofolk masterpiece where the word "wow!" floats above.
Did we already tell you that it's more than recommended?