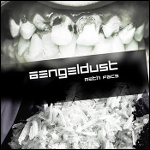 The Germany based project released its first industrial album "Freakshow" in March 2014 after two EP's called "Bloodsport" (2012) and "Dancefloor Killer" (2013).


Now the new 8-tracks-EP by Nadine "Cooraz" Engel (Acylum, Totem Obscura) crashes down on us with a crazy, loud and devastating sound combined with clear vocal samples.
Besides the song "Meth Face" and its hursh but danceable catchy rhythm, the EP offers the listener 6 mixes by no less than Antibody, Advent Resilience, Iñaki Kreator, Moon Gates Project, Detuned Destruction and VV303; each mix giving the theme song unique, rugged and sweeping shades.


In addition, the EP provides a remix of the song "Zombie", which originally occurs on the album "Freakshow". The Acylum mix appears almost slackening compared to the speed-afflicted and noisy Meth Face-variations. But it gives you the chance to take a deep breath before continuing the compellingly dangerous Angeldust ride to hell. This EP makes us infernally excited about what's coming up next to smash our auditory canals.