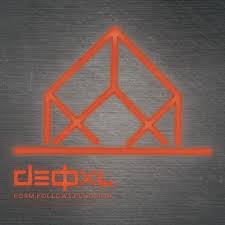 Ded Pixel is a new project on Analogue Trash Records. This Manchester based band is in fact the brainchild of Rhys H. Pixel, who is in charge of the loops, synths and vocals on this 5 track CD, and Ashleigh Talbot on bass.

His inspiration was found in the 70's and 80's pop culture, progressive rock and synth acts like Tangerine Dream, Jean Michel Jarre and even Kraftwerk. With elements of post rock, ambient, IDM and even atmospheric influences the Ded Pixel-sound is created.

Opening with ‘Beyond The Pale’, a track that slowly starts up, soft piano tunes are joined by bombastic drums, this all in a very nice atmosphere. Almost a cinematic landscape is created here. Most songs have a beautiful dark character, the sounds are carefully executed and this CD brings the listener in another world with mystic atmospheres and sometimes brutal beats.

This ‘Form. Follows. Function’ is a strong debut release, and I'm looking forward to hear more of this band in the near future

Tracks :
- Beyond The Pale
- Are We Still Here
- Cognitive Dissonance
- Malignat
- Ni