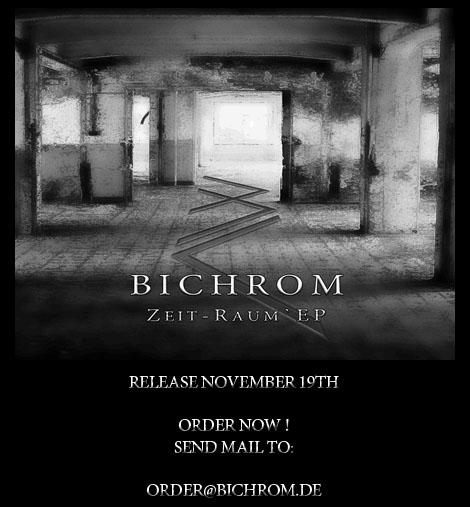 I haven't the slightest idea what the actually meaning of Bichrom if but, in terms of music, it's a trio from Sachsen, Germany.
Zarah, Daniel and Mike are quite modest in what they're doing, after all they're doing nothing new, just making dark electro pop and hoping to find the right beat and emotion, that's all.
"Zeit-raum EP" (delivered in those dreadful DVD cases) is their newest offering where all five tracks are sung in German.
For non-Germans it might be a lousy detail but the band pay much attention to the content of their lyrics and you don't have to be that much of linguist to guess what songs like "Meine wirklichkeit" or "Trauma" are about.
Still their music isn't that much a valley of tears as their dark electropop floats between Blutengel and a traditional synthpop band like say De/Vision.
Saying that they will conquer the earth would just be too much but anyone who likes dark synthetic sounds with a German touch will probably like this.