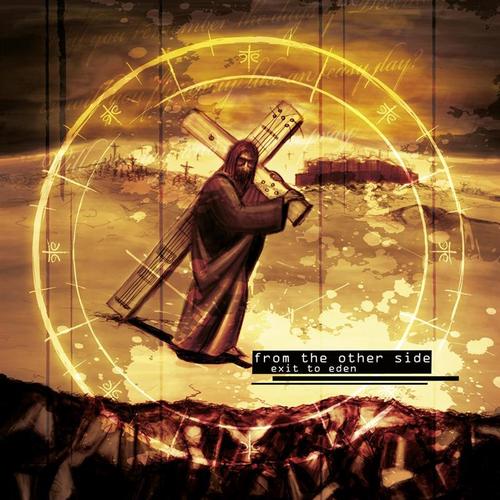 From The Other Side

People carrying a cross is nothing new on a cover but in the case of Exit To Eden it is, as the torture instrument has the form of a guitar.
Genius or just some bad joke?
We guess it's a mixture that presents us the best of both worlds as this Austrian band surely know how to deliver a good goth-rock song even if a genre like dark rock has its place as well.
On this debut they're represented by eight songs and from the very first moments it's crystal clear that singer RadoMir must have stood several times in front of mirror pretending to be Carl McCoy or Andrew Eldritch.
Nothing wrong with that, especially if they can manage to write a song like "Sarah" (without any doubt the strongest track on here or closing track "Remember" that could have graced any Bauhaus album).
Not all compositions are that strong and at times we felt that the guitar sound could have been a bit more adventurous. But there's still a future for this band, who played gigs with the likes of Vic Anselmo, Nik Page, Last days Of Jesus and Tanzwut.
Some will accuse them of clinging too much to the past and even if you can see quite well which heroes might have inspired them, Exit To Eden is a more than nice, welcome for people who like the sound of old school goth-rock that doesn’t avoid the rock part.