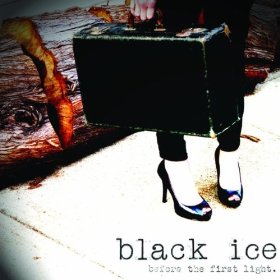 Before the first light

We guess that outside the American Bay Area no one has ever heard from Black Ice and that itself is a shame.
True, we actually say this about every unsigned band or talents that seem to be wasted just because of the ignorance from the music-audience but still we think that this time we got it right. Not that these Americans do anything new, at contrary!

But what they do is done good and they're coming up with a sound that we just haven't heard enough the last years.
From the moment the laser hits the disc you'll hear nine tracks that will let you relive the finest postpunk-moments from bands like Penetration, Siouxsie & The Banshees or even Ghostdance.

Due to the dark vocals from Miss Kel (love that name!) you'll tend to categorize this as goth and in a way it is but if this album (which already is their third one) would have been released in, say 1985, we're convinced that we might have used words like "an almost classic".

You can accuse Black Ice from digging in the past but it's better to be stuck in the past and coming up with the right melodies then pretending to be the future and being bland, not?

Same combination of genres: DARK POP + GOTHIC
LEBANON HANOVER • Tomb For Two
FLESH & FELL •
THE BEAUTY OF GEMINA • The Myrrh Sessions
RED TEMPLE SPIRITS • Dancing to restore an eclipsed moon/ If tomorrow I were leaving for Lhasa, I wouldn't stay a minute more...
VIC ANSELMO • In My Fragile
EXIT TO EDEN • From The Other Side
THE WOLF GANG • First Blood EP
LIFE IN SODOM • The Hollow and Haunted House EP
DEAD GUITARS • Stranger