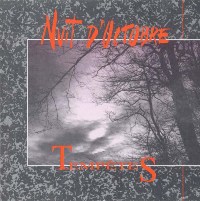 When we started our series CLASSICS we never promised that it was going to be easy to find the records we feature. Well, some are, others not. Good luck with finding this, even if there is always something like Discogs or fine record shops like Wool-E Shop that might help.

Back in the 90’s (and before) And Also The Trees were one of the finest coldwave bands. Of course you always had copyists who delivered some fine recordings. There was Dark Orange from Germany or Trees (I know, not very original!) from Italy. The band that came most close to And Also The Trees were the six-piece band Nuit D’Octobre from Switzerland.

They never hid their influences, their opening track was called La Ballade De Jones which was a hymn to And Also The Trees-guitarist Justin Jones…they even copied his unique guitar playing. But what’s wrong with copying anyway? Everyone think it’s okay to ape the sound of The Beatles, so why is there no place for a second And Also The Trees-sounding band? The raw vocals were a bit similar to The Young Gods and I guess it was no coincidence that they named their sole album Tempëtes… Rue Des Tempêtes you know.

Everything was here, even a touch of French touching pop as Eclusiers Du Brouillard sounded as pure Asylum Party! According to the net, the band had one more single and a single-sided cassette out. Try to grab this if you can…