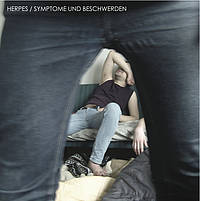 The 80’s are back, let there no be doubt about it. Some seek it in minimal synth, some go for post-punk and thank God, no one so far wants to reincarnate Kid Creole & The Coconuts.

A part of those 80’s was of course Die Neue Deutsche Welle.

It’s no coincidence that Herpes (what a name for a band!) supported last year Fehlfarben on their reunion tour as this Berlin-based band seek their influences in that particular genre even if you definitely can smell a love for punk as well.

Did we hear someone whispering the name of Spider Murphy Gang? A comparison like that kind of makes sense as singer Florian is the sort of front man who doesn’t takes himself that serious.

“Symptome und Beschwerden” has in the German press often been described as art-punk as well, and why not? You can hear definitely some Devo or Gang Of Four.

Sole minor point might be that you miss some of it strength if you don’t speak any German.