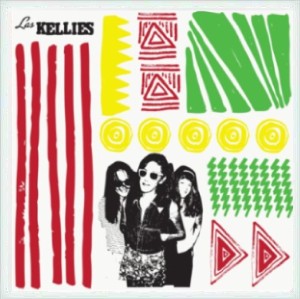 Something like a year ago I was reading the music blog from well respected music journo Everett True where he was raving about three Argentinian girls who were making the coolest punkrock you could imagine.

Blinded by their beauty, I decided to give it a go and it turned out that the man who made Nirvana big was right again as Las Kellies rule! Back then, they had recorded some 7" on the most obscure labels you could imagine but as good news spread quite fast, they're now signed on long time indie label Fire Records where they've recorded their debut and what a debut it has become!

The sisters Kelly (now you know why they're named as such!) take the silliness from Shonen Knife, add some female Riot Grrrl-rock from Bikini Kill and some good old fashioned rock 'n roll and there you go!

35 minutes of pure joy, "Prince In Blue" contains more rock 'n roll than some bands have in their whole career. Or what about salsa-postpunk (yeah, I made this one up) on "Adventure", while it's obvious on "Scotch Whisky" that they have some records by The Ramones at home.

This great pop-rock album ends with "Suffisant" in where those three girls sing (in bad French) their rock 'n roll hearts out.

Oh love this one...post-punk from Argentinia that's clever, sexy and noisy: what more do you actually want?