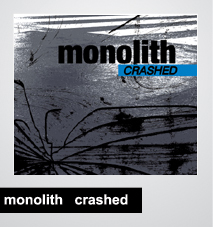 Monolith, is a solo project of electro music producer Eric Van Wonterghem (Sonar, ABC, insekt..), and well known for his electronic music arrangements that speak to both body and mind. Monolith brings us beats, repetitive loops, and danceable electro through the industrial landscapes, using vocal samples and even some exotic elements. The Belgian, who lives in Berlin has joined the German ‘Hands Label’ now. This new album ‘Crashed’ is highly danceable, from pure electronic music across the scenes to electro industrial underground, but the beats are everywhere. ‘Crashed’, is already his 8th album, and again fantastic. The repetitive electro industrial sound is dominated by incisive rhythms with distorted beats, even with some analogue synths.

A short forbidding intro of static fuzz and swelling atmosphere ‘No Escape’, and then it all starts, ten rhythmic tracks that will make you happy and dance your socks of. It’s all there, techno tracks, like ‘Rotated’ or more EBM influence like the title track ‘ Crashed’. Sometimes even you hear a ‘Klinik’ sound, the track ‘I Control Evolution’, could easily be made by his partner in crime Dirk Ivens. Personal favorites are, ‘Wired’, bombastic beats and loops that will make you move, and the brilliant ’10 Minutes before Blackout’ finishes this great album. Had the luck to see this brand new cd ‘Crashed’ being played live at the Forms Of Hands Festival, and I assure you that no one stood still during the set. So this album is a must have for every industrial techno dance lover

Other reviews from MONOLITH
MONOLITH • Domination
MONOLITH • The Inner Core