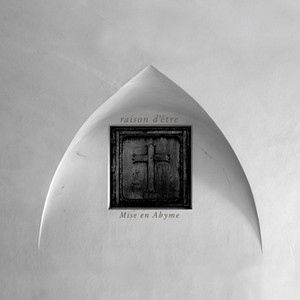 RAISON D’ÊTRE is probably one of the best known Swedish ambient industrial acts. After four years of silence the band returns with “Mise En Abyme”. An album that has all the elements that makes RAISON D’ÊTRE so special. The production of the album isn’t as good as hoped, because you need to put your stereo up to ‘eleven’ to hear the quiet parts. Especially opener ‘Abyssos’ has that typical, slowly built, song structure which RAISON D’ÊTRE is famous for. The following ‘Infernos’ is an almost atypical song for the Swede, because of the haunting heaviness and repetitive drones. The beautiful built ‘Katharos’, with sacred choir influences, is RAISON D’ÊTRE at its best. In this song beauty becomes beautiful threatening. Last song “Agraphos” keeps that haunting atmosphere with church bells and the sacred choir. Something he used before. “Mise En Abyme” is an introspective journey into the underworld, investigating the subconscious. There’s no better guide than RAISON D’ÊTRE. Fact is that this album has more diversity than some of his other albums. Therefore “Mise En Abyme” is a welcome return after four years and probably belongs to one of his better albums so far.