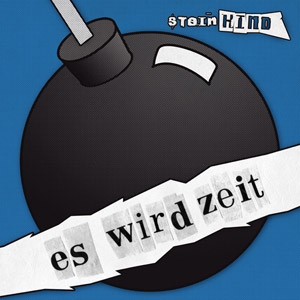 “Es Wird Zeit” is the second single from the last Steinkind-album “Etappe 011”, also released in 2011. Like any good EP, the track is exposed to some serious remixing. People who know the first Steinkind-release, “Deutschland Brennt”, will be a bit surprised by the “‘new” sound of Steinkind. The music is more mainstream, less aggressive … The normal 3 minute-version is followed by the “Extended Club Edit”, that has a more pronounced beat, but the general sound is still quite easy. “The Hartung & Schleinitz Remix” has a trancy/dance twist, the "KRTECH"-version tends to electro-punk. The last version (and to me by far the worst, sorry!) is the “Da Pill & DJ Sacrifice Remix” … or how to turn a nice electropop-track into a f*cking bad hardstyle / hardcore heap of sh*t. My finger is on the button, the skip-button!.

Besides the title-track and the obligate remixes, we get 2 bonus-tracks. I have the idea that they are more of a gimmick than real release stuff, but it’s very funny to hear the 2 extra’s (“Weil wir fressen” and “Heidi”). A nice add to a nice album, this EP. Just one awful mistake … Oh well!

15
01 ORDO ROSARIUS EQUILIBRIO
I never thought I’d live to see the day when Ordo Rosarius Equilibrio was mentioned next to Current 93 and Death in June.
14
01 IC434
find it amazing to live in a highly developed society and at the same time having to realize what a mentally mess it really is.
13
01 SYRENOMELIA
The drunk rural constable at the local pub.
11
01 CHRIS HASKETT (ROLLINS BAND)
'Musicians are more like radios that occasionally pick up and reproduce things from the cosmos.'
10
01 EVA - X
An Interview With Synthpop Act EVA - X