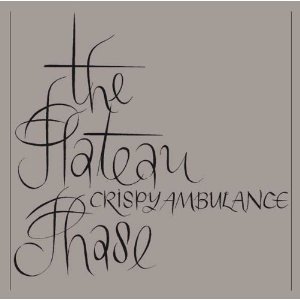 Blessed with one of the zaniest (and according to Tony Wilson, worst) names since Zoo's Those Naughty Lumps, Crispy Ambulance have an interesting place in Factory Records' history. Aside from their cumbersome moniker, lead-singer Alan Hempsall famously deputized for Joy Division's ill singer Ian Curtis at the infamous Derby Hall show that resulted in a riot back in 1980. It's a shame his own band rarely created such a rumpus because, overall, Crispy Ambulance had a lot going for them as this debut-album ably demonstrates.

Produced by Martin Hannett's then right-hand man Chris Nagle, The Plateau Phase is an earnest, accomplished and grown-up album that fused new-wave attitude with prog-rock overtones, borne out of heavy use of ARP synths and Hempsall's doleful holler that either drew you in or scared you off. Much of the band's output revolved around a central riff and dispensed with anything so trivial as a chorus, Intense and relentless live, on record they possessed only a fraction of the pin-sharp energy displayed on stage but still evoked more passion than many early '80s indie pretenders.

Are You Ready? is a terrific start to an album in anyone's book - a slowly building synth-rock throbber that culminates in a dervish of jagged guitar motifs and an uneasy synth hook throughout. Travel Time is perhaps a more typical Crispies track, complete with odd time-signature and droned vocals, an ingredient that repeats on the excellent near-instrumental The Wind Season and the almost-commercial Bardo Plane. The album's strength is in its varied songwriting approach and diversion away from standard verse-chorus composition. It's all in the build-up, as indicated on the likes of the title-track and the disturbing Chill. Perhaps one of the band's most triumphant moments is the closing theme, Simon's Ghost, an unassuming but pretty four-minutes that wouldn't sound amiss on a Cafe del Mar compilation, such is its calming bent.

As a bonus on this particular reissue, three songs issued on singles have been included - the majestic and superior Hannett-produced The Presence in all its 12 minute glory, its b-side partner Concorde Square which comprises a cracking three-minute near-pop song followed by five minutes of musique concrete derived from choral tapes, apparently put through the mangler by Hannett and the band's final Factory single, the less-successful carnal rocker Sexus.

Despite a five-star review in Sounds, The Plateau Phase achieved what most Factory albums achieved - precisely nothing, a criminal state of affairs. Thankfully, this timely reissue should remind a new generation that not all of Manchester's post-punk scene revolved around the ill-fated Joy Division - rather there was a steady stream of bands with almost as much charisma and a decent supply of gloomy raincoat-friendly miserablism to boot. You're going home in a Crispy Ambulance.