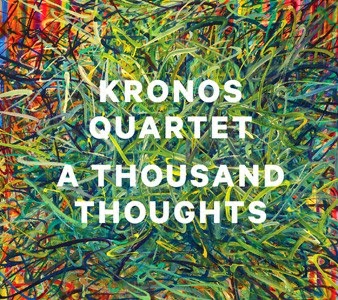 Active for the best part of 40 years, American quasi-classical stringsters Kronos Quartet have graced just about every music-store's genre filing system with a plethora of engaging recordings. From straight classical to soundtracks to blues, jazz and roots, the foursome founded by violinist David Harrington has explored beyond traditional music horizons more often than not.

A Thousand Thoughts compiles fifteen tracks from around the world, ten of which haven't seen the light of day before. In a little over an hour, the key Kronos players visit Vietnam, India, Sweden, Eastern Europe and Gaelic climes with considerable ease and more than the occasional nod to their earliest influences.

Tusen Tanker opens proceedings, a traditional and sorrowful lament derived from North Norway that ranks as a highlight of this varied and enticing collection. Similar triumphs include Far East piece Luu Thuy Truong and the pretty Irish folk tune An Buachaillin Ban, while more vibrant pieces such as The Round Sun And Crescent Moon In The Sky and La Sidounak Sayyada display the Kronos ethos of staying true to tradition without Americanizing everything. It's also great to hear vocalists Asha Bhosle and Le Mystere De Voix Bulgares present - the former delivers a beautiful vocal over Mera Kuchh Saaman, the latter calm the waters still further on Terry Riley's Cry Of A Lady.

Overall, despite a few grating pieces here and there, A Thousand Thoughts is a worthy and colourful travelogue through this important ensemble's kaleidoscopic career thus far. Kudos to Kronos indeed.