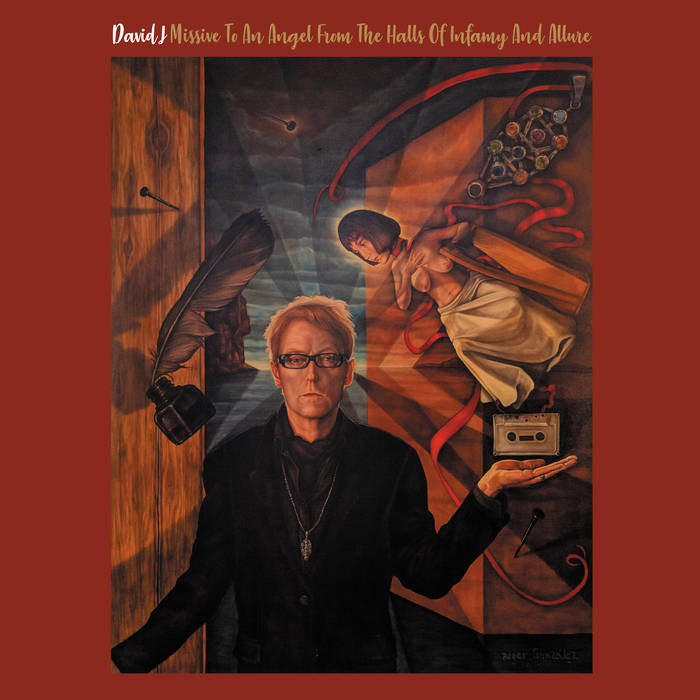 Missive To An Angel From The Halls Of Infamy And Allure

When it comes to deconstructing an album for review, it can become a task of comparison or a course of deep intellectual investigation. For the upcoming release by David J Haskins the collection can be summoned up in one word, fearless. That is at the very core of the themes along with the sound contained within Missive To An Angel From The Halls Of Infamy And Allure.

It seems only fitting, forty-years after David J first came into the gothic stratosphere with Bauhaus that he celebrates with such a career defining release. The album is a reflection of art, just as “Bela Lugos Is Dead” was a work themed from a cinematic source. Haskins uses society and love as his muse, taking the relevant themes of today and twisting them into his eccentrically magnificent style. It is also an album which charts the life of this elusive man and the wife which has brought him light in the darkness. Although his career is far from over, the sense that he may perhaps slow down is an overwhelming factor which is intertwined within the song cycle

Already audiences were given two single and video releases, that do as they should and act as a teaser for what is to come. Unlike trailers from a cinema perspective, the quality, and indeed complete sense of this release is not given away completely Opening with the subtle “Mosaic”, a poignant telling including the mention of John Entwistle of The Who, and his demise in Las Vegas (2002). Already examining his own mortality, and influence with one of his most inspired lines : “The clock it is a guillotine”

A mesmerising track subjected by a haunting violin that takes center stage midway, an air of late era Lou Reed to it, starting with such a theatrical song opens the doorway perfectly for the album. “Blue Eyes in the Green Room” is a more straightforward ballad, or as straightforward as David can get, the lyrics are some of the best of his career. Gently flowing acoustic guitars glide along against a gentle beat.

Violinist Karel Holas steps into the concept of “Baudelaire”, a folk telling, with the hypnotic bow work of Holas adding an extra depth to the dramatic telling. The emotional fuel burning in the voice of Haskins can at times be overwhelming, this is however an emotive work. “(I Don’t Want To Destroy) Our Beautiful Thing” is again acoustic driven, an ode to his love, and the feelings of joy that dwells inside. “Lovelorn” featuring Emily Jane White is upbeat in the style of Dylan’s “I Want You” with White adding to the repeated one word chorus. Holas appears again on “Clandestine Valentine”, a powerful statement that examines relationships from a perspective of looking back.

The collaboration with Asia Argento (daughter of Dario Argento) and Anton Newcombe on the latest thrilling “Migena & the Frozen Roses”. A dramatic reading, over an ambient urgency, built by Newcombe, reminiscent somewhat of avant-garde maestro John Cale. As the album continues its theme, a rush of waves opens the minimalist and dreamy “No Floods Can Drown”. The second part of the album continues with the rise from hopelessness, as with “Pre Existing Condition”, a look perhaps at the abyss of addictions, one of which is heartbreak, galvanized by flourishes of piano and an uplifting chorus.

Annabel appears on “Copper Level 7”, a tongue-in-cheek examination of sex, with some tasty guitar patterns, which is the latest video release fom the album (included below). “(Walked Away From) The Girl In Yellow” is paced by electronic drums and ambient sounds, the subject of turning your back on a one night stand and the conviction of mature relationships as you prove your faithfulness. All this pronounced by the atmospheric noise surrounding it. The mournful title track is exactly that, containing all the themes consumed throughout the album, condensed into four-minutes. His voice is soaked with emotion as David J delivers a song as if his life depends solely on this moment.

Further down the album comes the first snippet fans were given, the reworking of 2002’s “The Auteur”. Now given an updated twist in the form of actress and activist Rose McGowan. Her vocals are intertwined with the sound, alongside David J’s, and are built upon a background of ambient sounds and assaulting noise similar to his original gothic musings. “The Auteur (Redux / The Starlet’s Cut)” is both haunting and electrifying, Haskins’ vocals are Bowiesque, direct and executed with the dark passion he is renowned for throughout his forty-year career.

Closing out the set with “I Hear Only Silence Now”, the first track from his solo debut Etiquette Of Violence, this version updated with Emily Jane White. Something eerie that whether this is his last solo album as it ends with the first track from the start of his career. This is not simply a paint-by-numbers affair, Missive To An Angel From The Halls Of Infamy And Allure is a personal statement by one of the most elusive figures in music. A reflection of his life, his love and his inspiration. With further news of the Bauhaus reformation in Los Angeles this November, the celebration of the man’s work continues, hopefully this long-player is not the last release by David J Haskins.

All songs by David J