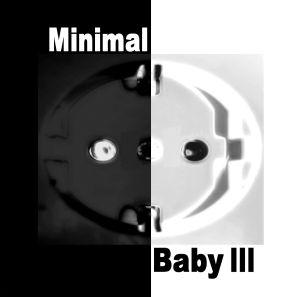 Minimal Baby III, released on Skulline is the third in a series of compilations, offering a timeless collection of minimal synth songs.

It's hard not to compare every contribution to our nation's pride Absolute Body Control, actually it might even a bit unfair to even bring ABC into the discussion, but it does offer a clear perspective to this review. ABC offers an engaged insight in the genre, setting new standards all around.

Sadly, standards are here to uphold, something that throughout the compilation fails. Don't get me wrong it remains a good compilation, with some excellent contributions from THE RORSCHACH GARDEN (the most poppy song) and LINOX (the most spheric) among others.

With a total running time of a soldering 70 10k resistors on a TB303 clone (that's 78 minutes in non-geek-speech), it's a diverse collection. The diversity is welcomed, as some of the individual songs often suffer from being too minimal, a single musical idea is often stretched into a song, varying only slightly.

Highlights for me are, apart from the aforementioned, Alien Skull Paint's Memories Fade ( a traditional), THEE VOID OV Zr19.84 (an ambient interpretation of the genre), SHIFT69's Bang The Sound (a dance floor filler) and the melancholic Schön Tot by SICKDOLL.