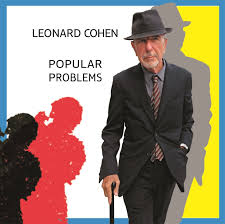 There's a line in Slow which sums gravel-tonsilled Cohen rather nicely - "I'm slowing down a tune, I never like it fast...". Why would he pep things up at the age of 80 yrs old by recording a collaboration with Lady Gaga or Skrillex? It would be a total travesty.

Thus on Popular Probems (naff title, Leo), he continues on his journey of putting maximum effort into making an album that sounds completely the opposite for all the right reasons. His 13th studio-album since 1967's Songs Of Leonard Cohen sounds musically like Yello (Almost Like The Blues), Tom Waits (Did I Ever Love You), Dr John (A Street) and, naturally, Cohen (the rest) without breaking sweat, suffice to surmise that Popular Problems won't tarnish his career anytime soon.

One key song stands out - the Americana-tinged and simplistic brass-flavoured My Oh My sounds as wonderful as Ain't No Cure For Love, a single in the making and surely a set favourite in years to come - it reminds me of Mike Scott. Because surely, Leonard Cohen will go on forever - it certainly seems so.