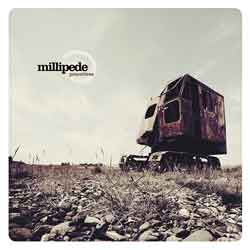 Milipede is the brainchild of Don Hill and once you hear this name (at least for those who are familiar with it) you know that we are talking about a man who is one of the rocks the Hymen-label is built on.

« Powerless » is the follow up to « All my best intentions » which has been released two years ago. With his newest album Don is looking back on a period in his personal life that’s been marked by the colour black.

The title says it all. This cd deals with not having the power to cope with issues like love and death. It are always the same issues, but then again it are those that rule this world.

Don decided to work with lots of artists, this results in every track being a collaboration. Some of the guest musicians you’ll find here are artists like Candle Nine, Access to Arasaka, Brett Smith from Caul or James Church who is the man behind Lucidstatic.

This electronic piece of music has influences from styles as various  as IDM, dark ambient or even neoclassical.

Somewhere «Powerless» is a record with two faces. On one hand there are tracks like « Gathering clouds » or « While he sleeps » that are dominated by a daydream-mood and the soft pianosounds can be linked to the sweetest tracks by Orbital, on the other hand there's of course that black beast showing its side. «Synovial Damage» for instance is a brilliant piece of industrial wherein anger rules.

This makes this record quite schizophrenic, not? Great stuff, balancing between fascination and fantastic.

Other reviews from MILLIPEDE
MILLIPEDE • A Mist And A Vapor