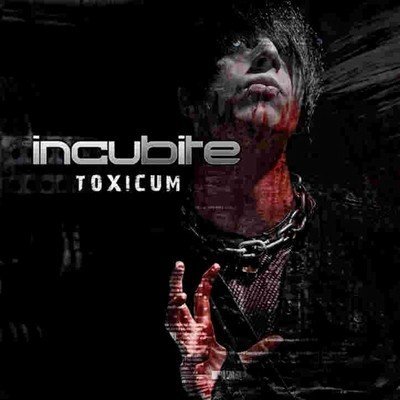 I guess it’s not the first time someone tells you better not to judge a book by its cover. In the case of Incubite, we can’t help it repeating that old cliché.

On the cover you can see some young guy who’s drenched in blood and even if you’re expecting some harsh noise, the sound is different.

They are not the type of band who are hesitating to bomb you with tons of decibels but still you can consider “Toxicum” as an enjoyable noise/ebm/metal-record or at least something like that!

Incubite comes from the Ruhr-area in Germany and is fronted by Neil Oblivion. Two years ago they had a smashing hit in the German clubs with "Muschitanz" and of course a full album had to be made. Even if we are complaining that many dancealbums suffer from a monotonous sound or that it only has some use on the dancefloor, Toxicum prove that it can be done in a different way.

Their secret is more than simple as they just use the right beat, the right guitar, the right melody or just the right text.

From the very beginning, things are going in the right direction with "Judgement Day" and it’s quickly followed by "Deafening" that contains an irresistible indusbeat or what about the whipping sounds from "Glowstix, neon & blood" ?

"Toxicum" is clearly inspired by the later Suicide Commando but no one here at the office that complains about that!

And just in case you think they have no sense of humour: just listen to "WW3" in where you can hear a hilarious German version from the titlesong from Kubrick’s "Full Metal Jacket".

Oh yes, we are aware that some people will rather puke from this music but just as we like the cliché about the book and its cover, never forget the one about the colours and tastes and their differences.