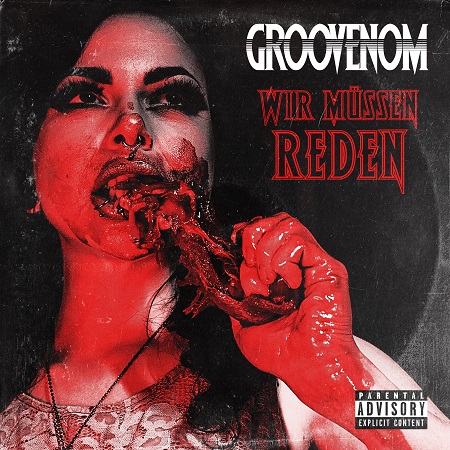 GrooVenoM has matured, still directly charging forward with their unique blend of industrial, gore metal, but now they have released both an album and short film that is Wir müssen reden(We need to talk).
The German death machine of versatility have plunged their very souls into this recording, twelve-tracks which pulls the listener into the abyss of dark landscapes and hopelessness. As a concept it works well, as a solid album it is the sound of doom let loose.

Opening with “Alter Freund”(Old Friend) a song which simply reconnects the listener and fan to the sound of the band. An orchestral collage builds, an eerie intensity before the crank of guitars burst into play. It is that sound that is wholly GrooVenoM, deathly sounds that are wholly melodic.

With “Unter deiner Haut” (Under Your Skin) is a standout, clearly all the events of this war machine are front and center, with the most unexpected sing along chorus. This is perhaps that maturity at play as the music becomes more accessible than on other releases but retaining all the qualities that make GrooVenoM a force of nature.

“Faust” is all out metal, trigger-happy drums and the vocals of Mr. Sanz are at their most choking, evil and throat-ripping goodness. “Du und Ich” (You And Me) is more reflective, skipping between the intense and the intimate with effortless action. “Nimm mich” (Take Me) is a more industrial synth exploration, closer to the sound of earlier albums. It is a mean, wounded beast, staggering around a wasteland of sound.

“Nach Hause” (Go Home) starts with a quality of eighties-new wave, stuttering synth bleeps with a phased vocal line. A hugely enjoyable track and a calm in the storm of atomic blasts that GrooVenoM have made their trademark. Wir müssen reden is an enjoyable record, working as a concept album it is themed with spirit throughout. This may prove to be the GrooVenoM album that will break them to an even wider audience.