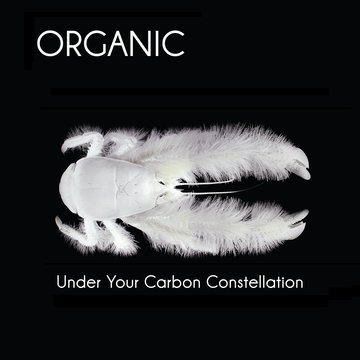 Under Your Carbon Constellation

I first heard about this band -hailing from Brussels- through my colleague Jeremy, who went to see these guys play in support of Graham Coxon of britpop legend Blur. According to Jeremy, Coxon was shite! But Organic blew his socks of... Strangely enough this debut album is on a Swedish label but at least they found a label who believe in them.

And rightly so, this stuff is great! Singer Raphaël Haubourdin drags you inside the music with his powerful and expressive voice. He switches between french and english and really does have something to say! Sometimes he reminds me of Ian Curtis, or even the gnarls of Iggy or TC Matic's Arno (Katharina Distortion), but in the end he just has a very good and unique voice, excellent! Then there's also a great bass player, good hacking drums and they also added some electronics that never get the upper hand. A very well balanced whole.

I love the amount of variety in the album, they made a synthesis of the whole postpunk and new wave era. If you know they only exist from 2011 it's amazing to hear they already have their own sound. Opening song "Seeds" is instrumental with stoner rock influences. Sometimes they sound very raw and edgy (The Meat We Kill, UFO) or even a bit martial (Johnny Craque, Sequence Of My Projector). On "The Day Of The Locust " they explore a bit of gothic rock. The single "Waves Are Running" is a wonderful ode to coldwave, with haunting synths, killer guitars and compelling lyrics, this should be on radio!

If you want the vinyl version, make it snappy because there are only 300 copies! And then you get four unreleased songs! Another good one by CCP!