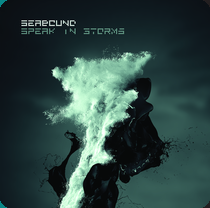 Seabound was formed in 1995, with Frank Spinath and Martin Vorbrodt from Germany. The name ‘Seabound’ implies a ship leaving from a save harbor into the unknown sea. Throughout the years Seabound has built up quite a nice reputation with the synthpop lovers. The band is still a duo, but for live concerts they are supported by Daniel Wehmeier on drums

After 8 years the band finally releases a new album called ‘Speak In Storms’, and this is by far the best album they ever made. Catchy rhythms, nice synths, it’s a mix of club, electro and dance. The openings track ‘For Life’ is brilliant, opening slowly, and then building up to a great electronic climax. Also the lyrics will not leave you uninterested , it’s a balance between heartbreak and revenge. There is even room on this album for some slow, but catchy songs, ‘Liberty rose’, ‘Liar’, or ‘Black Feathers’, again with nice lyrics and vocals. Although you can say this is a real futurepop album, it still is variable in sounds and rhythms, a song like ‘Everything’ could easily be from a band like VNV Nation, nice beats and very danceable, and ‘Nothing But Love’ would be the perfect single from this album.

'Speak In Storms' comes in 3 formats : standard jewelcase, limited edition digipack double CD and the 'Tempest Edition' that's with an extra 7" with a 48 hardcover book, in a limited of 300 copies. Nico J. (Acretongue) is the cover designer

Seabound is teaming up with Iris for a European tour to support this album. So If you have the time, and they come in a venue near you, don't hesitate

CD 2
1. When She’s Hungry
2. Everything (EvvvilKing Remix by Steril)
3. For Another Day (Dead When I Found Her Remix)
4. A Grown Man (Andrew Sega Remix)
5. For Another Day (Wesenberg Rework)
6. Black Feathers (Requiem)