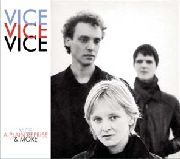 The greatest thing about listening to music is the magic of the discovery. I mean, it's nice (even more than that) to have your David Bowie or Pink Floyd in your collection but there are also those great gems which nobody has ever heard from. Agreed that it goes along with some snobbery. You know: I know this and you don't blah blah blah...., but still a nice thing anyway.

What an introduction to get to the core of this review, not? Out of the blue I got a "new" album by a band named Vice. Who? Well, a band named Vice coming from the Netherlands who were music during 1981 and 1984. Nah, never heard from them either but now you get the opportunity to do so as the French cult label Infrastition have gathered all their recordings onto one cd.

Even if their tunes are quite poppy I wouldn't say they make easy music. Let's say it's sophisticated wave pop that comes close to the stuff from country mates Mecano and Minnypops, and I wouldn't disagree if you say there's a little touch of Les Disques Du Crépuscule (let's say Isolation Ward!) in it.

There are 18 tracks included in here. At the end of the day, all you can do is take a deep sight and wondering why this was uncovered during more than three decades. I guess that's the other side of the coin.... Anyway, now you can discover it even if you'll find no one who knows 'em but then again....so what!?