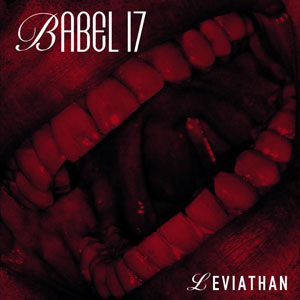 They'll probably be never huge, but in my book they are (kind of). And I guess not only in mine as Babel 17 is a band which is "known" by a handful of people. Not because they're snobs (even if you'll find some) but just because these people are having the luck to know that this band is making excellent pop wave.

Just like their country mates Asylum Party and Little Nemo, Babel 17 were lucky to be picked up by a tiny (but oh so brilliant!) label named Lively Art, home of excellent French wave. Years later, almost no one remember that but despite the lack of success they're still around and this time (it's all so logic!) they're picked up by another tiny French label that gathers the best from the country of the Eiffel-tower: Infrastition.

Leviathan is the fourth album made by Babel 17. At the end it's difficult to describe this pagan gothwave. You might hear echoes from Virgin Prunes to Play Dead but at the end of the day you heard ten tracks which were composed like its still 1986. There's indeed nothing new under the sun but in their case that's only a godsend as they're one of the last crusaders of quality gothrockwave or whatever. So yes, quite recommended.