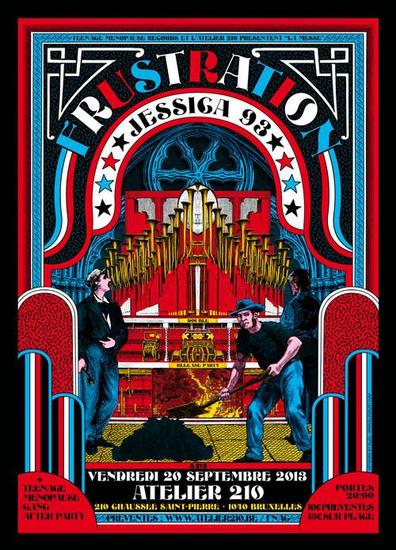 It was simply one of the best concerts of the year, in my opinion! On the bill, two French bands that have a lot in common: energy, a dark edge and a clear postpunk heritage.

Jessica 93 is the first to take the stage. The wonderful old theater hall is packed with more than 300 fans of different styles: hipsters, electroheads, punks, and of course a lot of "darko's" (postpunk/new-wave fans - I hate the word "goth's")... Jessica 93 is the one-man-band project by Geoffroy Laporte from Paris. Funny: the name, Jessica 93, comes from the fact that Laporte's mother told him that if he had been a girl, she would have named him "Jessica", the 93 comes from a nickname given to him by a friend, "Jojo 93". His latest album, "Who Cares", released at the end of June 2013, has been acclaimed by the music press and is available on three music labels, among which Teenage Menopause.

Alone on the stage, wearing a hooded sweatshirt, which gives him a devilish look, Laporte uses a Boomerang looper machine to build his songs layer by layer. First, he triggers a drum pattern, on which he then plays a bass or guitar riff on the fly, which is then integrated in the backing loop track, and then, on top of this, he sings and plays additional (live) guitar or bass lines. The result is a hypnotic, haunting shoegaze music that puts you in a trance, a combination of My Bloody Valentine, Sisters of Mercy and The Soft Moon. The highlight of the set was the wonderful song "Away": more than 8 minutes of pure pleasure. Check my video of this unique moment:


Laporte also played two new, unreleased songs: "Endless" and "Asylum". A great concert, which was very much appreciated by the audience. The only drawback of this kind of live acts is of course the fact that the musician is alone on stage, which tends to become a bit boring in the long run, a feeling that can be strengthened by the repetitive, rigid arrangements. Laporte told me after the concert that he plans to change this in his new compositions, which will be more diversified, less linear. In the meantime, don't hesitate and rush to buy Jessica 93's album "Who Cares" here!!

After a few beers, it's time for the headlining band. Frustration is a French electro-punk-rock band formed in 2002 in Paris. The group combines electronic sounds with a punk rhythm. It is probably one of the best avatars of Joy Division on the scene today (esp. since the legendary band de Volanges called it quits). They have this unique capacity of creating postpunk anthems with highly energetic (and very catchy) arrangements and melodies. Songs like "Blind", "Too Many Questions" or "No Trouble" are must-have's for every dark DJ. The new album entitled "Uncivilized" was released in early 2013 and is a collection of future classics.

I had already seen Frustration many times, a.o. at the Recyclart in Brussels and in Templeuve and here again, they gave a memorable concert, leaving us soaked to the skin at the end. Oddly enough, the band members, especially the singer, Fabrice Gilbert, looked perfectly sober (it wasn't always the case in the past, to say the least!). I would even say they had a 'professional' attitude on stage, playing the songs perfectly without exceeding enthusiasm. Not really a 'punk attitude', but who cares: their music is so strong, so efficient in its nature that the audience was completely carried away from the first song ("Worries") to the last ("Faster").

They played no less than nine songs from their new album and I must admit that they smashed the house. But of course, the highlights of the show were the band's hits, especially "No Premises", "No Trouble" and the last song of the first set, their masterpiece "Too Many Questions". Check my video of this performance below:

In the circle pit before the stage, there was a lot of moshing all through the show and at the end, a few girls even jumped on the stage to dance beside the musicians, who didn't seem to worry too much about this invasion. The first song of the first encore was a new, unreleased song, "Coz You Ran Away", followed by the absolute killer: "Blind", from the band's first album "Relax". Then, they played "Dying City", from their last album, a very danceable composition, with its pounding electro riff, played by Fred Campo on his vintage Oberheim OB-12 synth. When the lights came back in the hall, many people thought it was over and left the venue but a few minutes later, Frustration came back to play "Faster" like a final punch in the face.

A fantastic concert! No trouble: don't ask yourself Too Many Questions: those guys are still On The Rise!...

Congratulations to Atelier 210 and Elzo Durt (Teenage Menopause) for the flawless organization!