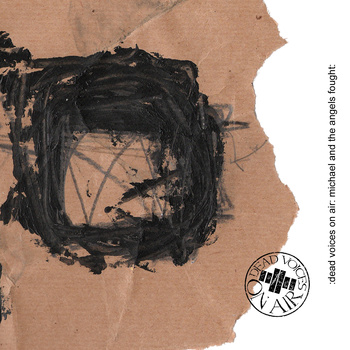 Michael And The Angels Fought

Mark Spybey, previously with Zoviet France, has been working under the name Dead Voices On Air for about twenty years now. He also worked with a host of impressive names like members of Throbbing Gristle, Skinny Puppy, Swans and German krautrockers Can and Faust. You could say he's more of a sound sculptor than a traditional musician.

The five 'songs' are very different episodes, not only because of the different people he works with. "Shadow" sees cellist Bela Emerson embark on another experimental trip, yet retaining her jazzy background. The hopeful "Voice" might have been a Dead Can Dance song, with the mesmerising voice of Ivana Salipur. "Pulse" has an earthly, tribal feeling so it's not far from the things he used to do with Zoviet France. After a while it becomes more of a In The Nursery style soundtrack.

Darker and more abrasive is "Moon" which flows out into a very subtle ambient soundscape. On the last song "Sudden", he gets some help from Michael Page (Sky Burial), Jared Louche (Chemlab) and Robin Storey (Rapoon). So it's not surprising it's slightly droney, with loads of layers floating around. Great build-up to the (sudden and noisy) climax also!

Don't expect a dramatic soundtrack like In The Nursery, when five songs are good for 65 minutes of music you know this is much more subtle! So it can be a bit tiring but fans will know DVOA means quality. It just depends on the listener...