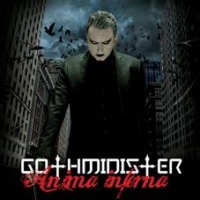 Not that many readers have an idea who Björn Alexander Brem might be, but if we mention that he’s the name behind Gothminister than gothrock fans will know that this man is since 2003 releasing some great things.

From his debut “Gothic Electronic Anthems” on, Gothminister refused to spin himself down onto one particular genre. In his melting pot of Goth, dark electro, metal and industrial everything was allowed: as long as it was dark sounding of course!

Originally Björn was intended to make a Gothminister-trilogy and once the other albums (“Empire of dark salvation” and “Happiness in darkness”) were made, many fans feared Gothminister would call it a day. For some time it seemed to be like that. But late 2008 showed that it only turned out to be an empty prophecy.

2011 sees the return of the only minister we can give our faith to. “Anima Inferna” has become without any doubt the highlight of Gothminister's career so far and more than once Björn seems to have no musical bounds as this newest release mixes all the (dark) genres we like.

Along with US-producer Neil Kernon, Gothminister made an epic album in where melancholic keyboards go hand in hand with a fist of metal. Of course we can imagine that some music fans will accuse him for overacting but this doesn't stop us from deciding that this album is a gothrock-must!

Sadly enough, Gothminister’s fame was mainly limited to the German-speaking area but with this album that contains strong tracks like “Liar”, “Stonehenge” or “Solitude” (we could mention the whole album mind you!), let's hope it changes one day!

One of the gothlights of 2011 so far. To be checked out by all dark souls!