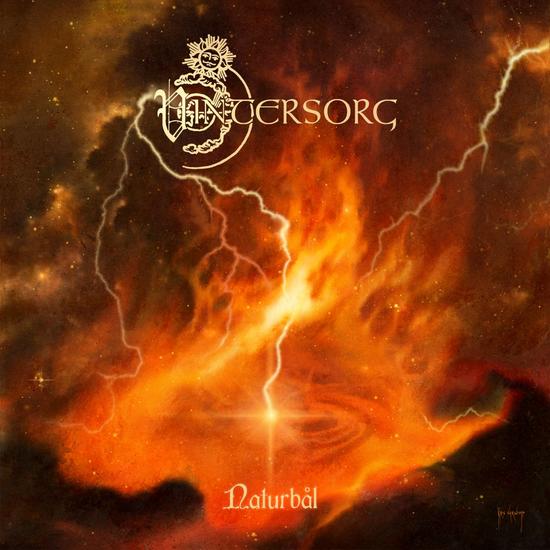 "Naturbål" ("Nature's Bonfire") is yet another groundbreaking Folk Metal record in the discography of the Swedish mastermind whose characteristic vocals and unique songs have left their mark on a whole genre. Folkloristic tunes merge with technical guitar riffs and multilayered melodies. Anthem-like refrains provide the finishing touches to this sweeping symbiosis.

So far the promotional intro and extra info for the people who haven't heard anything from them. As they sing in Swedish and most of us are not speaking any Swedish, I decided to include the lyrical notes (as the record company was so nice to include them)! Hurray!

‘Ur aska och sot’ Mr V: The whole album deals with the element ”Fire” in one way or another as this is the third album in the ”four element cycle”. This song would translated be something like ”Out of ashes and soot” and it takes up the subject when the fire has been raging across the land... what happens afterwards… a new scenery is growing forth and nature has fertilized itself in a way. It has also a more philosophical aspect, that everything in life has different stages and that kind of assumptions.

This track starts like a metal bomb: speed metal but with soft melancholic male and female voices and a beast to conclude the trio! The vocals make it very interesting and create a lot of variation! I just have to get used to the Swedish. The song sounds very catchy and it must be a pleasure on stage! I also detect some classical instruments and the folky influence.

‘Överallt och ingenstans’ Mr V: An approximate translation would be ”Everywhere and Nowhere”.

Everywhere you look you’ll find the building blocks of nature’s utter processes...still it hasn’t got one specific place where it dwells. It’s like a formless creature that rules every aspect of our surroundings. It deals in that sense with a nature romantic perspective, still you can find a bit of scientific aspects in there as well. The stars are the fire that continues this ongoing journey.

It starts acoustic, a bit like L.E.A.F.; until vocals, drums and guitars make it explode. The folky interlude is simply fun, they could focus more on it to create a new and more Folk minded track, at least that is how I feel it. I cherish the catchy sound!

‘En blixt från klar himmel’ Mr V: Epic motif. Lightning strikes and set fire to a tree that has been both the physical shelter but also the symbolic shelter for Man. And the fire lights up the dark night and serve as Nature’s own bonfire.

It starts with I would call Thor swinging his hammer and indeed hitting the tree. After that the drums awakens the monster. I discover some symphonic metal in it. Again the catchy sound got me!

‘Lågornas rov’ Mr V: ”The flames prey”. A large forest fire is making its way through the woods and ”eats” everything that can serve as it’s fuel, it’s getting wider and wider for each second until path... a broad walking path cut of its hunt. A very adventurous lyric that we also will do a video to.

Somehow this one makes me happy and feels positive. It might be because of the great symphonic metal sound. The guitars are set at their highest level of their possibilities! Finger licking good for guitar lovers!

‘Rymdens brinnande öar’ Mr V: ” The burning island of space”. It’s very obvious that it deals with the Stars. It’s a poetic angle of it as we live by the grace of the stars and they guide us through time and space. We look at them and try to understand our role and place in these enormous structures. The stars are the warmth and the light; still they represent the cold and vast space. The lyric has a very ”visual” approach.

Continues where the last track left us. Again there are the 3 vocalist from the very beginning. The melancholy in it is just great! Just as the sound, this is pure gold!

‘Natten visste vad skymningen såg’ Mr V: ”The night knew what the twilight saw” It’s a bit odd in that sense that nature has a bit of an animistic style in this song. But still it deals with a human person that is astray in the forest as the twilight is setting in... soon it will be dark and all the imaginations and fears that ”one” can attach to such an adventure is soon to be at display. The person needs to rely on his/her own knowledge and has to make decision of how to form fate.

The comeback of the acoustic part is warmly welcomed! The sound is most of the time softer, despite the monster behind the microphone. The tempo is still high, it just has a bit lesser aggressively.

‘Elddraken’ Mr V: ”The Fire Dragon” the song is based on the concept of volcanos. The dragon is the volcano itself that spews out smoke, ashes and fire... for the landscape to ”cope” with. The meaning it’s not that deep, just a nice way of writing a volcano lyric but not being too scientific. Its food for our imagination.

Starts speeded up, clearly with the most aggressive sound so far. I absolutely love the a capella end and that gives the feel that they might do something like Van Canto, one day?

‘Urdarmåne’ Mr V: No really good translation here. It’s folklore....when the moon’s crescent is horizontal it usually meant bad news in the old days... people believed that it was a sign of bad luck, bad harvest, bad agricultural season... just simply very bad news. The world got spellbound and everything was on the verge to fall apart in one way or another...in some regions they also thought that the moon itself could shoot fireballs down to us all on this planet.

Has a nice piano and some kind of harp in it, a flute and acoustic guitars: it all sounds very folky, but then again the track explodes with the ads of the vocals, the guitars and the drums on speed! The metal spirit is awakened!

‘Själ i flamma’ Mr V: ”Soul on fire” this is a very positive song. The words are about how we as humans are at many times able to really ”burn” for something that occupies our interest, out of that we make great things in life. That ”fire” comes from nature in this lyric, to observe and ponder about nature is the very sense of being a part of nature...which leads to more reasoning about the issue.

Is as the words above point out a very sweet song, with some grunting in it: but it’s driven on the right feel! The guitars and drums play their part for the last time! We got left behind with a very positive note and push the repeat function to start digging deeper into this great and fantastic world!

I must admit that I like this band more than Finntroll! Once again, this was fun time of great quality!