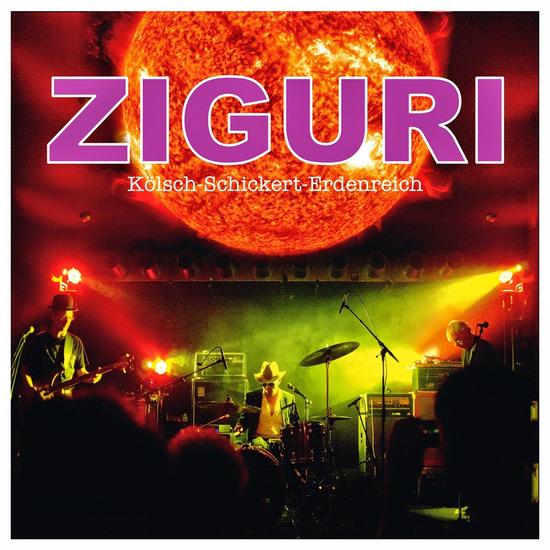 Ziguri is a Mexican name derived from the hallucinogenic Peyote cactus which is as apt a name as you could get, considering the music on offer - there may have been some narcotics involved in the making of this album (allegedly). Messrs Kölsch, Schickert and Erdenreich have all at some point, collectively or solo, stamped their credentials all over the German psychedelic scene during the past thirty years or so - Ziguri is the result of a resumption of band status in 2011. Still, it's still something of a surprise to learn that this five-track album is indeed their debut. It's only taken 27 years or so, after all.

Opening piece General Klickman certainly bears all the hallmarks of Krautrock masters Can, with its insistent motorik rhythm and hollered stuttered vocals, a formula repeated on the albums whirling dervish of a closer, Goa Constrictor (see what they did there?). So what happens in-between? A fair bit - Massa is the rather more spacey inclusion here, vaguely reminiscent of Steve Hillage or Ozric Tentacles, while YoYoDyne is a brooding rock workout that reminds me of The Pixies for some strange reason. Perhaps it's the part-spoken vocals and the oblique lyrics that do it.

Bella Hopp is a pulsating mantra of sorts and takes the whole Ziguri exercise to a new level with a celebratory and almost religious experience that builds organically without the need for too much studio trickery en route.

Schneider TM, alias Dirk Dresselhaus, is your producer and the whole album clocks in at under forty minutes, some of which has previously been aired at recent shows supporting Damo Suzuki