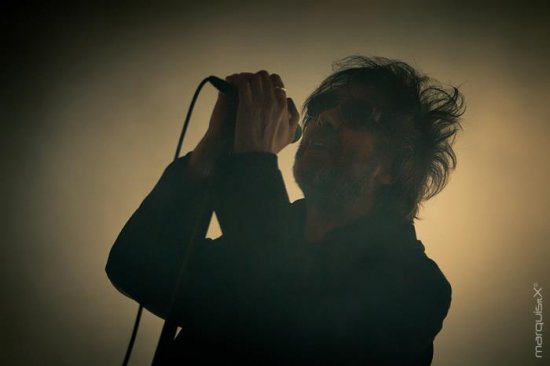 Following their US and UK tour, Echo And The Bunnymen were stopping by at the Ancienne Belgique to play their first two albums "Crocodiles" and "Heaven Up Here" back-to-back. These albums date from '80 and '81, and for a lot of fans, they are the best ones, that is before the band became a mainstream success.

The venue was packed as the concert was sold-out. The stage was decked with camouflage netting. To the familiar Georgian chants, on strolled the band and the show started with the first song of "Crocodiles": "Going Up" and I must admit I was impressed by the quality of the overall sound, esp. the crystal clear voice of Ian McCulloch, the band's charismatic leader. The light show was minimal and the band was constantly playing in the dark. You could barely see Ian's face but with the camera flashes you could see that he was wearing a beard.

Before the next song, "Stars Are Stars", Ian said that "Brussels is the best place to play" and of course we believed him... Hum... The title song "Crocodiles" and "Rescue" were the first highlights of the show and the fans began to move and to sing along: "Won't You Come to My... Rescue". The band went on to play "Villiers Terrace" and in the middle of the song, the band played excerpts from "Roadhouse Blues" (Doors) and "Jean Genie" (Bowie): fun! The first part of the concert ended with the wonderful single "Pictures On My Wall", followed by "All That Jazz" and "Happy Death Man". Oddly enough, they didn't play "Do It Clean" and "Read It In Books", the 2 songs which were removed from the UK release but appear on the US release and on the re-issue of 2003.

After Ian's long awaited cigarette pause, the band came back to play "Heaven Up Here", an album that contains quite a number of jewels, like "Show Of Strength", "With A Hip" and "Over The Wall". The show was pretty much the same, with very little light on stage and a rather static band. The sound was still as good but you could hear that Ian's voice was a little weaker as he struggled to reach the higher notes. Another highlight of the show came with "The Disease" and my favorite "All My Colors (Zimbo)". We were surprised to see the band leave the stage after the song, which means they didn't play the 3 last songs of the album: "No Dark Things", "Turquoise Days" and "All I Want": disappointing.

Fortunately they came back for an encore, in which they usually play a few hits from other albums of the band. In "Bring On the Dancing Horses", Ian threw his tambourine to the crowd in the balcony and the atmosphere became even hotter with "Nothing Lasts Forever". To introduce "The Killing Moon", Ian very modestly said "This is the best song ever written"... and frankly there's an element of truth in this. "The Cutter" brought the final... cut to the concert and the audience seemed to be satisfied with the show.

As a whole, it was indeed a great show musically. The band consisted of original members Ian McCulloch and Will Sergeant (guitar), accompanied by Stephen Brannan (bass), Gordy Goudie (guitar), Nicholas Kilroe (drums) and Jez Wing (keyboards). The rendition of the 2 albums was perfect. Too bad that the light show sucked and that Ian made his usual provocative comments between songs (and also in the middle of some songs), a bit like Liam Ghallagher... In a nutshell: the songs were a very nice "echo" of the past but visually they were only the "shadows of the Bunnymen"...

Picture by Xavier Marquis for indiestyle