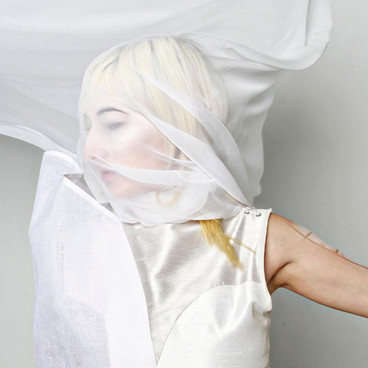 An artist that's currently shooting through the roof after only a few years is Zola Jesus. Zola Jesus is Nika Roza Danilova and her talent is inversely proportional to her height, just as Björk (but I think she's even smaller, hehe).

After Stridulum, where she made an amazing combination of her prolific voice and dark industrial-like soundscapes that managed to sound poppy, Conatus is her new album. Is it because she is getting more and more attention? I feel she's making too many compromises on this one. "Vessel" has a base of soft minimal piano with some triphop influences. It works well with her voice but after a while she indulges in a heap of loops and echo's and it ends up with an anticlimax. "Hikikomori" adds some violins and the difference with the harsher Stridulum is becoming very apparent.

"Seekir" and "Ixode" remind me of the kind of triphop/dance that a certain Björk was doing in the mid 90's, she was always ten years ahead of her time but here Nika just sounds dated. So far not so good but "In Your Nature" is a bit better. "Shivers" has a faster beat with some drum 'n' bass feel to it, her contrasting slow paced vocals do wonders here! Finally a great song! The intens piano on "Skin" reminds me of Soap&Skin and is another very good song. Next up is "Collapse", again with that same pianosound, very sad and believable, her voice fits like a charm on these heartstopping songs!

Too inconsistent and sometimes too commercial, only the last part of the album is of the Zola Jesus standard. Sorry but I can't get excited about Conatus like I did with Stridulum...