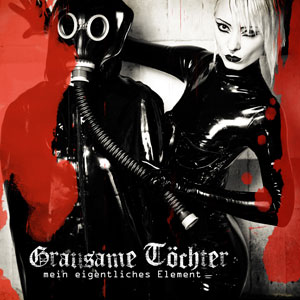 More or less by coincidence I came across the sounds of Grausame Töchter on webradio and got curious about Aranea Peel's project. Formed in 2009, she now offers us her debut album with 'Mein Eigentliches Element'.

Already the opener 'Untergang' offers a good introduction of what to expect here: very drumbased sounds mixed with some noise attacks. Over the top the at times, almost lovely, fairytale-lke or rather harsh and determining sounding vocals. It is definetely not an album for lighthearted or anyone who wants to hear about how beautiful the seaside is... If you still remember ECO and you can deal with straight into the face lyrics, this is a nice release for you. A vinyl edition would be perfect, to give oneself a short breather in the middle before being attacked again by Aranea. The whole album could work well as a soundtrack for an exploitation flick without any doubt.

Especially recommended: 'Freundin', a lovely story about a girl who no-one wants to be friends with except one merciful lady, there are some rules for this friendship, though... Oh, and before I forget it, better not play this album for your grandma!