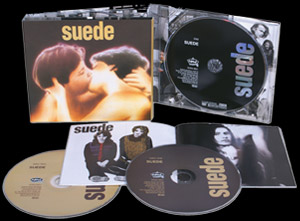 Remastered and a tacky badge... how many times has one thought about this when being lead to buy an album again after a certain amount of years? Luckily, with Suede, the situation is a bit different. Edsel are now re-releasing all 5 studio albums that the band has released so far. Weekly one after the other.
Suede were already hyped in the UK music press before they even released a single - not uncommon back in the early 1990's, before the days of Britpop, when the weekly magazines always tried to find the next big thing (anyone remembering 'New Wave Of New Wave' or 'Romo'?). One simply didn't do Suede justice with that hype, as the band was way more, which they proved over 10 years. Their debut went straight to number 1 in the UK album charts.

Now, some 18 years later, we see a massive 2CD+DVD reissue of the album and it is well worth the money, if you ask me. Kicking off with one of their strongest singles 'So Young' and ending with the beautiful 'The Next Life', 11 classic Brett Anderson / Bernard Butler compositions are filling the room once again, having lost nothing of their appeal. Suede were always a band with multiple b-sides that some fans considered to be among the best stuff they ever put out. This release sees the b-sides being added on a second disc, among them such Suede classics as 'To The Birds' or 'My Insatiable One'. You'll get songs/versions that were recorded for compilations as well, including their cover of The Pretenders 'Brass In Pocket'.

Suede fans may already have all of those songs, but for them, digging in the archives took place and 10 demos and outtakes were found, among them a demo with Justine Frischmann (Elastica), who was a member of the band in their early days and where is that tacky badge I hear some of you asking? Sorry to disappoint, no tacky badge included, but what about a massive dvd with videos for the singles, a Brit Award appearance and a recent interview with Bernard & Brett? Sounds good? Exactly, plus additionally you can find 2 live gigs: one from Brixton (has been available before on VHS 'Love And Poison' and a recently discovered, previously unreleased concert frrom Sheffield that took place before the album was even released). Definetely recommended!