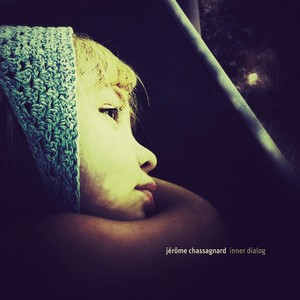 The French composer JÉRÔME CHASSAGNARD is looking back into his childhood experiences with his third album. Supported by his wife Pei Yun Yu and French sound artist Jérémie Mathes “Inner Dialog” is an introspective journey filled with idm, electronica and chilling ambient.
At it’s best when the piano takes a lead role and almost creates ambient melancholic neo-classical songs like ‘Childhood’ and the brilliant, haunting ’Green Island’. The cover of the album seems to have been made for these two songs. It’s not that the other, mostly, tranquil songs aren’t good, but these two mentioned songs truly hit a nerve. The quiet, introspective mood of the other, more electronic oriented, songs are nicely balanced, but their more ‘floating spirit’ (like for instance on ’Walking On’, ’Sparkle/Time’ and ‘Urban Sand‘) isn’t as mind-blowing as the tension in the two mentioned songs. Mostly due to the more open character of these songs.
Still, a great well thought of album with beautiful introspective music with an edge. If you dare to explore your own past in a way like this you need all the credits you can get.