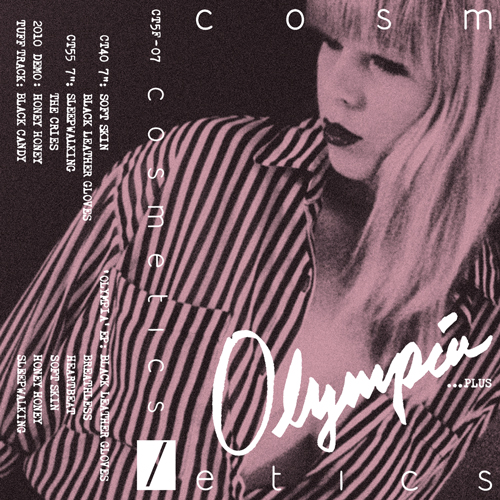 If your first contact with the Cosmetics is the band page on Facebook, you’ll have the opportunity to download, for free, their cover version of Beat Happening’s “Black Candy”. Don’t hesitate, press the “download” button and listen to Aja Emma’s sweet voice singing “Suck my blood, join the club, breakfast dud, cross my heart”. You might as well close your eyes and believe this is Jessica, the young vampire of the American series True Blood, singing this verse (for those who never saw any episode of True Blood, you should know that vampires do not only drink human blood, but are sometimes willing to share theirs). Beat Happening was an eighties indie band from Olympia, Washington, in the North-West of the US, a place that was made famous by other vampires, for teenagers, the Twilight saga.

But let’s leave the blood suckers for now, although “Olympia” also happens to be the title of the first Cosmetics’ EP, that was released last summer in a limited cassette edition (Olympia … plus), featuring their first 2 singles and the previously unreleased cover of Beat Happening, just mentioned.

As a matter of fact, “Olympia” was actually mixed in Olympia, but Cosmetics are a duo from Vancouver, Canada, which is actually just across the border, and finally not so far away from Portland, the city that saw Chromatics or Soft Metals emerge, two bands Cosmetics have had the occasion to play with, and with whom they share more than the west coast of North America.

So, are Cosmetics just another minimal synth male/female duo, such as Xeno & Oaklander, Sixth June, Lebanon Hanover or Soft Metals ? Obviously they play in the same league, but they are definitely adding their new synthetic piece to the puzzle.

Olympia Plus “album” starts with their first single, “Soft Skin” which is dense, frightening and cold, with Aja Emma voice reminding us of Zola Jesus, in the chorus, before softening again. The tone is set. The repetitive, hypnotic and even danceable “Black Leather Gloves” then starts, letting Aja whisper about her feelings of pleasure wearing black leather gloves. You get the picture. This is dark again, but the darkness of underground night clubs, lined with velvet, silk and leather. When “Sleepwalking” starts, we’re still in the middle of the night, a slow disco starts, the voice of Aja Emma being soft and engaging again. A very cool electronic disco, obviously very far away from the sweat of Saturday Night Fever. And the beat goes on, with the pop tune of the aforementioned “Black Candy”, or with the early 80’s slow beat of “Heartbeat” that recalls early Human League stuff (with their cover of Gary Glitter’s Rock and Roll) or with “Honey Honey” that starts like Kraftwerk until, again, Aja’s voice takes the control and tells us another story. “Honey Honey”, “Heartbeat” and “Breathless”, yes there are two human beings behind the machines, obviously.

This must be the secret of Cosmetics, in the end, the subtle merge of the cold, simple and repetitive sounds of the machines, with the sensuality of the Aja Emma’s voice and lyrics. A music that is definitely electronic, cold and minimal though very often danceable. And if you want to add vintages images to the music, just dive into Cosmetic’s Instagram or Tumblr pages which are a perfect support to Olympia.

“Olympia Plus”, that will be re-edited in vinyl in April, is an expanded version of the “Olympia” EP, so it comprises several tracks in two different versions. Don’t’ be surprised that, when it ends, you are left slightly unsatisfied and wanting for more. Good news for you, you should not be waiting too long, a full album should be released shortly. To be followed thus …