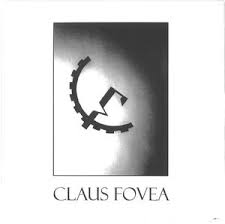 Claus Fovea is a Stockholm based project by Viktor Elander. Musically it has big influences of the 70s and early 80s industrial and electronic scene, so the lovers of synth minimalism and monotonous baselines should have a listen to this vinyl single.

The A-side is called ‘Cyanide’, and calls for the growing European rightwing movement to follow their old leader. Nice analogue drum and synth machines combined with shady vocals in a cold mix of echoes and reverbs, a real great minimalistic track.

The other track is called ‘ King Ludd’, and is inspired by an old poem by Lord Byron, written in 1816. It tells the story ot the worker(s fight against the oppressors before the union was born in England.

Both tracks are nice, but I think Victor listened a lot to older tracks of Absolute Body Control.

The single comes in two versions. The first 70 copies have a vintage-like poison bottle label glued on the cover, the other 200 got a regular printed cover. A total of 270 copies, black vinyl.